Nigel Dodds criticises May over agreement’s handling of North 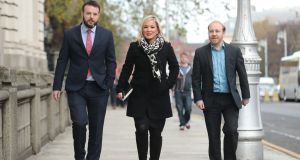 The deputy leader of the Democratic Union Party (DUP) Nigel Dodds has criticised prime minister Theresa May over the draft Brexit deal’s handling of Northern Ireland.

Speaking in the House of Commons, he told MPs: “I could today stand here and take the prime minister through the list of promises and pledges she made to this house and to us, privately, about the future of Northern Ireland in the future relationship with the EU.

“But I fear it would be a waste of time since she clearly doesn’t listen.”

DUP’s Brexit spokesman Sammy Wilson said the deal was a case of “Northern Ireland being put on a platter as an object to surrender to the EU”.

On Thursday morning a group of Northern Ireland politicians met the Taoiseach in Dublin to discuss the draft Brexit deal.

Outside Dublin’s government buildings, Mr Eastwood said difficult days lay ahead for prime minister Theresa May, but the group’s focus was on Northern Ireland.

“We have to make sure the backstop is fully backed, and that’s what we’re focused on, protecting people across this island,” he said.

“I think people should take some time to read the full implications of what this will mean.”

Ms O’Neill said the group in Dublin represented the majority of Northern Ireland on a cross-community basis.

“It’s a very fluid situation, and I think it’ll be a very interesting day.

“For us, we want to remain in the customs union and the single market and we want protections for the Good Friday Agreement, our message is as consistent today as it was yesterday.”

After the meeting Ms O’Neill said: “We have had a very positive meeting with Taoiseach and Tanaiste, a meeting where we were able to seek some assurances over what has been achieved in the agreement so far.

“We come at it from a number of basis, firstly that we need to protect the Good Friday Agreement, we need permanency in the backstop and no room for withdrawal from the British Government, and that has been achieved thus far.

“We are broadly positive.”

Mr Varadkar announced he would meet with the Northern Ireland parties on Wednesday night. However, the DUP and Ulster Unionist parties were not in attendance.

The Taoiseach added that he had not spoken to DUP leader Arlene Foster on Wednesday but said: “The door is always open and the phone is always on.”

The DUP which is propping up British prime miniser Ms May’s government signalled it could not support a deal that included different conditions for Northern Ireland to the rest of the United Kingdom.

On Wednesday night, DUP leader Arlene Foster told the media “we cannot have the fact that it would be the break-up of the union.”

In the House of Commons on Thursday,What has the reaction been in Northern Ireland to the draft negotiated deal i?

The News Letter’s Morning View described the deal as an “almost complete victory for Ireland and the European Union,” and a “complete climbdown” from Ms May.

“The DUP cannot possibly support this capitulation — the effective impossibility of NI leaving the EU trade zone,” the Belfast paper, which takes a unionist perspective, stated.

“Grim though the prospect of a Brexit no deal is, it is better than this agreement. But the deal will get through if enough Labour MPs back it, which will be a black day for the UK,” the Morning View leader said.

Writing in The Belfast Telegraph, Jane Morrice, former European Commission chief in Northern Ireland, said the backstop agreement, which would effectively keep Northern Ireland in the EU customs zone, “would mean the best of both worlds.”

“By possibly staying in the single market and the customs union, Northern Ireland could become the envy of the British Isles, attracting foreign direct investment from far and wide in its position as a gateway to Europe, the UK and the rest of the world” she wrote.

The Irish News editorial said following the agreement it was beginning to dawn on the DUP that its relationship with the Conservative Party “would end in tears.”

“Brexit was always going to be a disaster for all sections of our society and it is now dawning on the DUP that it will result in a catastrophe of historic proportions for unionism in particular,” the newspaper’s leader on Thursday stated. The Belfast newspaper takes a nationalist position .

“None of this is going to turn out well for the DUP, and its ordinary members, including the slowest of learners in their ranks, must surely wish that they could turn the clock back and reverse their approach to the 2016 poll,” the editorial said.

The reaction of both Sinn Féin and the SDLP centred around repeated calls that it was key the withdrawal conditions included a backstop against a hard border being put up between Ireland and Northern Ireland.

On Thursday morning, Northern Irish political columnist Newton Emerson tweeted: “For the first time since the referendum, I think it’s possible Brexit may not happen. But still very, very unlikely.”

According to the agreement released on Wednesday night, a protocol on Northern Ireland provides a backstop guarantee that will safeguard Ireland’s soft border, guarantees continued security co-operation, protects the Common Travel Area and safeguards both human rights and the 50 or so cross-Border programmes that have come out of the Belfast Agreement.

Northern Ireland will remain in the same customs territory as the rest of the UK, but will be subject to the EU customs code and to some EU regulations.–Additional reporting PA