Next stage in dealing with insurance crisis ‘up to judiciary’ – Minister 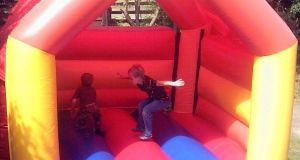 It is now up to the State’s judges to cut high insurance awards if insurers are to be encouraged back into the Irish market, Minister of State Michael D’Arcy has declared.

“I’m doing everything that I can do but it falls to the judges to reduce the awards next,” said Mr D’Arcy, who has responsibility for the issue in the Department of Finance.

A personal injuries committee of judges will be ready to set guidelines for personal injuries awards, particularly for whiplash and soft tissue injuries, he hoped, though a final decision is down to the Chief Justice.

Saying that, he does not want to hold a referendum to set limits on compensation awards, the Minister of State said: “If it doesn’t get done in a timely enough fashion then we may require a referendum to get it done.”

Sinn Féin’s Pearse Doherty warned that children will “never experience a bouncy castle on the island of Ireland ever again” unless action is taken soon to prevent the closure of so many children’s activities.

Two adventure centres have closed in Meath, while a swimming pool has gone in Kildare: “And these are only the ones hitting the headlines,” said the Donegal TD.

Replying to questions, Mr D’Arcy said: “Are the insurance companies making super profits? I don’t know but they are profitable but this is an arm of insurance that has not been profitable.”

Last week, he went to London and met insurance underwriters and highlighted the reforms made by the Oireachtas including the Judicial Council Bill which has been passed and commenced.