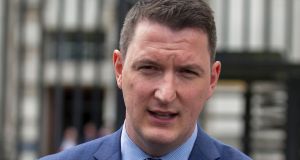 Lord Mayor of Belfast John Finucane is to stand for Sinn Féin in North Belfast in any forthcoming general election.

The solicitor was chosen as the party’s candidate at a selection convention in Belfast Castle on Sunday.

Mr Finucane, the son of Belfast solicitor Pat Finucane – murdered by loyalists in collusion with British security forces 30 years ago – previously stood for Sinn Féin in the constituency in 2017.

He failed to take the seat from DUP deputy leader Nigel Dodds, who defeated him by approximately 2,000 votes, but increased Sinn Féin’s vote in the constituency by close to 5,400 votes.

In his speech following the nomination, Mr Finucane said his candidacy represented an opportunity to elect an anti-Brexit MP in North Belfast.

“We are a city opposed to Brexit,” he said, “yet we have the political situation that three of our four MPs continue to tell us, in the face of overwhelming fact-based opposition, that Brexit will be good for us.

“This is wrong. This has to change. The opportunity to change this situation is before us.

“In Belfast, Remain voters outnumbered Leave voters in 2016. Belfast is opposed to the Brexit agenda spearheaded by the DUP and Nigel Dodds.

“We can elect a pro-Remain, anti-Brexit MP in North Belfast. The numbers are there to make it happen,” he said.

“This election has the potential to be an historic one for us and North Belfast is a key battlefield.”