New water charges plan: maximum cost will be €3 per week

The main points from the Minister of Environment, Community & Local Government's speech regarding water sector reforms. 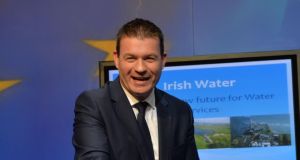 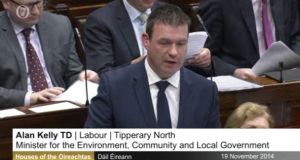 Minister for the Environment Alan Kelly this afternoon set out the details of the water charges regime. Photograph: Oireactas TV

Households will face an “absolute maximum net cost” of slightly more than €3 a week for water, Minister for the Environment Alan Kelly has said.

He told the Dáil the water charges would be €60 for households with one adult and €160 for all others, when a €100 allowance is taken into account. These rates will remain in place until the start of 2019, he said.

Mr Kelly said he believed the package would be regarded as “fair by the vast majority of our people”.

“It will be accepted as fair by the many people who have borne a burden of austerity but who aspire to a better life for themselves and their families and, indeed, a better Ireland, ” he said.

The Minister also said he would legislate to ensure a referendum would be required if any future government sought to take water services out of public ownership. People registering for the utility will no longer be expected to provide a PPS number and those already received would be deleted, he added.

The Dáil was suspended for 45 minutes this afternoon following a row between the Government and the Opposition after Mr Kelly outlined the revised water charging regime.

The row came after the Minister left the chamber as the Opposition responded to his proposals. The sitting was suspended for 45 minutes.

The Minister also announced that:

- properties that require just one of the water supply or sewage services will pay 50 per cent of the rates. 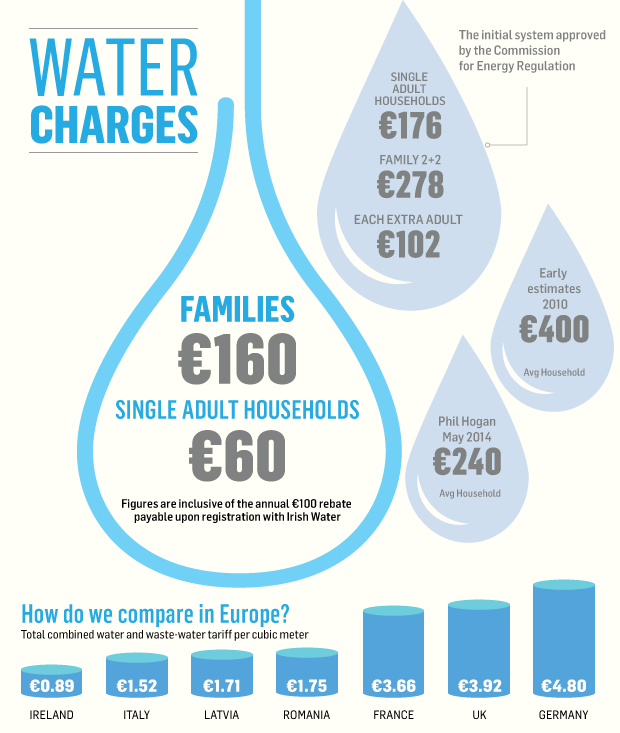 - the starting date for domestic water charging will be January 1st, with first bills issuing in April

- customers who fail to pay a bill or enter into a payment plan face late payment penalties of €30 (single adult households) and €60 in other cases. This will added to bills three months after a year of non-payment

- households that failed to register will receive a default bill of €260 per year and will not receive €100 Water Conservation Grant.

Addressing the Dail this afternoon, Mr Kelly said the Government had made “mistakes“ when it came to water charges but faced a critical choice based “on either short-term emotion and anger or long-term prudence and common-sense“.

“We as a Government needed time to listen and take stock and have done that,“ he added.

Mr Kelly said the Government and Irish Water had been operating to demanding timelines and tried to do in three years what other countries did in five to ten years.

“In advance of the completion of the metering programme, the charging regime was overly complex, it was not well understood by the public and it had created uncertainty for customers regarding their bills in 2015 and beyond,“ he said.

Today‘s package “corrects those mistakes“ and “gives every citizen of goodwill, every customer of Irish Water, a firm, fair and affordable basis on which to move forward to a better future - where we will have a national water utility that will be a world leader in its field and that we can be proud of“.

The Minister said the “absolute maximum net cost is now just over €3 per week. For single households, it will be approximately €1.15 per week - Much less than one per cent of most people‘s incomes or benefits and puts water bills among the lowest in Europe. “

He said that if metered households reduced their water consumption by 10 to 15 per cent “then approximately half of Irish households will be able to ‘beat the cap‘ and have bills lower than the amounts outlined.“

Mr Kelly said that when the water charges were considered alongside the budget, “every household will be better off in 2015 than they were in 2014.“

The Minister said he would legislate to remove the power to cut off or reduce the supply of water to properties where water charges are wholly or partly unpaid. He said he would insisting that Irish Water distinguish between customers “who want to pay, but can‘t, as opposed to those who refuse to pay“.

Mr Kelly said the Government would tomorrow advertise for positions on the Irish Water board. He welcomed a decision not to proceed with a bonus system in 2013 and 2014.

He said Irish Water needed to invest some €600 million every year and that it had to be able to do this itself so that it was “not in the same queue as hospitals, schools and welfare benefits for funds“.

Mr Kelly said he believed the package would be regarded as “fair by the vast majority of our people“.

“It will be accepted as fair by the many people who have borne a burden of austerity but who aspire to a better life for themselves and their families and, indeed, a better Ireland,“ he said.