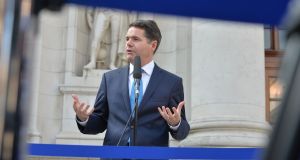 Paschal Donohoe: the Minister intimated that the clash between two of the State’s most powerful public bodies was partly behind the reason to initiate an investigation. Photograph: Alan Betson / The Irish Times

The State’s spending watchdog has published a damning report concluding that the sale by the National Asset Management Agency (Nama) of its Northern Ireland portfolio involved a loss to the taxpayer of €220 million.

The 170-page report by the office of the Comptroller and Auditor General (C&AG), Séamus McCarthy, is highly critical of the manner in which Nama disposed of 800 properties to US firm Cerberus for €1.6 billion in a deal known as Project Eagle.

“The decision to sell the loans at a minimum price of £1.3 billion involved a significant probable loss of value to the State of up to £190 million,” its main conclusion states.

Minister for Public Expenditure Paschal Donohoe intimated that the extraordinary clash between two of the most powerful public bodies in the State was partly behind the reason to initiate an investigation. Asked about his reaction to the criticism made by Nama of a C&AG report, Mr Donohoe said that they were “both exceptionally important organisations”.

He expressed full confidence in both organisations despite the conflict of opinion on the report’s outcome.

“We also do believe, given the issues, given the differing views of both bodies, that a further investigation is warranted by Government,” he said.

Nama’s board concluded that a discount rate of 10 per cent, rather than the normal 5.5 per cent, was appropriate. This was because of the need to “reflect all of the risks in the portfolio and the cost of capital to the purchaser. Risks Nama considers specific to Project Eagle included the poor relative quality of the assets, weak market conditions, fractious debtor engagement and the political considerations specific to the Northern Ireland assets.”

However, the C&AG report concluded that the argument for a 10 per cent discount was “not persuasive”. The report was also critical of the sales process, saying some firms withdrew citing a lack of relevant information.

“One firm withdrew in early March 2014 because, inter alia, it was refused a requested four-week extension of time to examine and evaluate the information, but in mid-March 2014, two extensions of time totalling two weeks were granted to the firms remaining in the process.”

It says Nama “should have formally considered whether Mr Cushnahan’s engagement in discussion of the strategy . . . was consistent with his ongoing involvement as financial adviser to a significant proportion of Nama’s Northern Ireland debtor connections”.

The report also says that, over a period in March 2014, Nama learned of “the existence of an alleged success fee arrangement” with a potential payment of about €17 million. The payment involved Mr Cushnahan and the legal firm Brown Rudnick, the managing partner of Tughans, a Belfast-based legal firm, and was to be shared equally.

“Given the joint agreement between the parties to the success fee arrangement with [investment fund] Pimco, all of the payment – not just the payment to Mr Cushnahan – should have raised concerns for Nama,” the report says.

It adds the Nama board then learned of a “success fee” involving investment fund Cerberus, Brown Rudnick and Tughans.

“The allegations of Mr Cushnahan’s involvement in an arrangement to share fees with Brown Rudnick and Tughans (or the managing partner of Tughans) warranted more action by Nama when the matter came to light,” it says. “Nama appears to have taken a narrow approach, focusing on what were its legal obligations.”