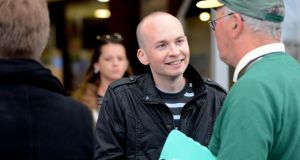 Former Socialist Party MEP Paul Murphy is to stand as a candidate in the Dublin South West byelection.

Mr Murphy, who replaced TD Joe Higgins in the parliament and lost his seat in the May elections, announced at a press conference today that he would stand as an Anti Austerity Alliance (AAA) candidate.

He said that the people of Dublin South West had decisively rejected the politics of austerity and of putting banks and bondholders before people’s needs in the recent elections.

“In the aftermath of those elections, the gulf between the rhetoric about recovery and reality continues to widen for most people, as austerity policies continue as usual,’’ he added.

Three other candidates have already declared for the byelection which is expected to be held in late September or early October. They are Cllr John Lahart, Fianna Fáil, Cllr Pamela Kearns, Labour, and Senator Cait Keane, Fine Gael. Sinn Féin and the Green Party have yet to choose a candidate.

The vacancy was caused by the election of former Fine Gael TD and minister of state Brian Hayes to the European parliament. The sitting TDs for the constituency are Pat Rabbitte and Eamonn Maloney, Labour, and Sean Crowe, Sinn Féin.