More than 158,000 UK applications for Irish passports this year 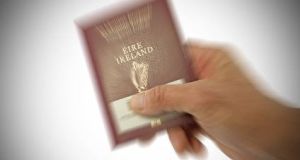 In 2012, the Department of Foreign Affairs processed 45,646 passport applications from Britain. This nearly doubled to 80,752 last year, and the 2018 total stood at 73,583 up to the end of this October. File photograph: Getty Images

More than 158,000 people from Northern Ireland and Britain applied for Irish passports in the first 10 months of this year.

Last year, 163,000 applications for Irish passports were received from the United Kingdom . Of those, 82,274 applications came from Northern Ireland.

The figures, from the Department of Foreign Affairs, represent a sharp increase in the volume of applications from the UK, following the June 2016 Brexit vote to leave the European Union.

The data on the number of passport applications up to October 31st was released following a parliamentary question from Fianna Fáil spokesman for foreign affairs Niall Collins.

“This is evidence of the impact of Brexit on the thinking of many members of the Irish diaspora living in Great Britain, and I suspect of many unionists living in Northern Ireland who want to retain their citizenship of the European Union,” Mr Collins said.

An Irish passport would give citizens in Northern Ireland and mainland Britain access to the same rights as any EU citizen, such as freedom of movement.

“It will be interesting to note the number of applications for Irish passports after the UK officially leaves the union at the end of March 2019,” Mr Collins said.

“The full ramifications of what leaving the union, and in particular giving up the automatic right to free movement across the EU, means may only become apparent when reality bites,” he said.

Negotiations over the withdrawal agreement and future relationship between the UK and the EU are coming to a head.

British prime minister Theresa May will seek to pass a draft negotiated deal on the terms of the UK’s departure from the EU in the coming weeks, with intense political uncertainty over whether Westminster will back the deal. Ms May faces mounting opposition within the Conservative Party from hardline Brexiteers over the text.

On Saturday, former British foreign secretary Boris Johnson said the UK was “on the verge of making a historic mistake” if it voted through the draft Brexit agreement.