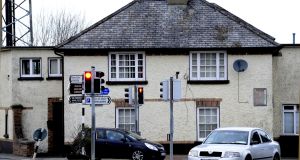 The former Garda station in Stepaside. The Office of Public Works and An Garda Síochána are understood to prefer a new modular station. Photograph: Cyril Byrne

Stepaside Garda station is poised to reopen as a modular Garda station, under plans being considered by the Office of Public Works (OPW).

The Irish Times understands four options have been presented as part of the Government commitment to reopen the station.

However, the OPW and An Garda Síochána are understood to favour the establishment of a new modular station, which would amount to a facility built in sections and transported to the site.

It is understood the advice from the OPW is that the cost of rebuilding Stepaside station may tip €2 million, due to the poor condition of the station.

The modular option would be significantly cheaper but could still reach €1.4 million.

The options have been relayed to Minister at the Office of Public Works Kevin “Boxer” Moran, Minister for Justice Charlie Flanagan and Minister for Transport Shane Ross in recent days.

Mr Ross championed the reopening of the station at the last election and insisted it be examined as part of the Programme for a Partnership Government.

The Minister has not yet seen the plans for the station, but Mr Moran is believed to have visited Garda headquarters in Phoenix Park over the weekend to assess the proposals.

It is understood the Ministers have been advised the construction could begin sooner than anticipated and would take a shorter period of time if the modular option were adopted.

It would also result in a significantly lower cost. The modular station would be facilitated at the same location in Stepaside and would be the size of four car parking spaces.

The three Ministers have been in regular contact to reach an agreement, which could allow work to begin as early as this year.

Six Garda stations are due to reopen as part of a commitment contained in the Programme for a Partnership Government.

They are Ballinspittle in Cork, Bawnboy in Cavan, Donard in Wicklow, Rush in Dublin , Leighlinbridge in Carlow and Stepaside. Stepaside is the most expensive by far.

Speaking to The Irish Times, Mr Flanagan declined to be drawn on the proposals.

However, he added: “The reopening of Stepaside Garda station is the recommendation of the Garda Commissioner. As Minister for Justice, I am very keen to assist where possible within my own remit.”

Meanwhile, relations between the Independent Alliance and Fine Gael may sour in the coming days as it appears the Judicial Appointment Commission Bill may not pass before the summer recess.

The Bill is still on committee stage in the Seanad and the Dáil rises today. It appears the legislation, which proposes to change the way judges are appointed, will not pass within the tight timeframe.