Miriam Lord: The curious incident of the dog in the boot 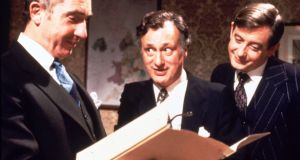 John Murphy bowed out as secretary general of the Department of Jobs and Enterprise this week and he told some great yarns about his time in the Civil Service at his retirement do in Iveagh House.

His current Minister, Mary Mitchell O’Connor, spoke glowingly of her departing sec gen, summoning his wife, three daughters and mother-in-law to the microphone to join in the good wishes.

He met John, who was holding a large carrier bag. Richard asked what was in it.

And we hear “the room was wedged with Sir Humphreys” on Tuesday night.

The departing mandarin told the crowd of an episode from the early 1980s, when he was a lowly private secretary to a Fine Gael junior minister and a delegation had arrived at Leinster House for a meeting.

But the minister was nowhere to be found. Murphy entertained them with cups of tea and small-talk.

After a long delay, his man finally burst through the door, very flustered. He beckoned the worried factotum to one side. A hurried conversation ensued.

“Will you go out and look after something for me?” whispered the agitated junior minister, throwing his car keys at Murphy.

“There’s a dead dog in the boot of the car and its owner is outside in the passenger seat.”

Further explanation revealed he was driving to Leinster House when a dog slipped its leash, broke away from its elderly master and ran straight in front of the vehicle. There was nothing he could do to avoid it.

His civil servant hurried to the car park and met the elderly man, who didn’t seem too upset.

So Murphy suggested they drive to a nearby veterinary clinic to see if the poor animal could be “saved”.

Having already checked in the boot, the private secretary knew that the time for medical intervention had long passed.

When they got there, he explained his predicament to the vet: it might not reflect well on his minister if the press heard that he had a dead dog in Leinster House.

The pet was carried into the surgery, with the Murphy and the vet emerging 10 minutes later to sadly inform the old man that his beloved dog had just passed away.

The owner shrugged. He was getting old and finding it very hard to manage the dog, so it was probably for the best.

As for the junior minister (who would never harm a fly), he left politics after losing his seat in the 1989 election and concentrated on his legal career.

He is now a distinguished High Court judge.

Regina’s plan to make up for lost time

The Dáil returned from its summer recess during the week, having closed for legislative business on July 21st. Today is October 1st.

Given the length of time so far this year that our legislators have been unable to focus on their primary duty, one might expect heroic efforts on the work front between now and Christmas.

What with the election and the protracted government negotiations, and then the need to close the place for longer to install new voting and audio systems, they haven’t been able to get a good run at things at all.

Thankfully, the newly formed Business Committee is on hand to make sure TDs can get down to brass tacks without further interruption.

Established in June to set the House’s agenda, it meets every Thursday to deal with issues such as speaking times, adjournments and the taking of legislation.

This is all down to the “new political landscape” where TDs of all stripes can have a say how they conduct their business.

The week before the Dáil reconvened, Chief Whip Regina Doherty presented her 12-week schedule for the term, proposing there should be no break at the end of October.

Her fellow committee members sent her away with a flea in her ear. Miss their Halloween midterm break? Not likely.

So Doherty returned this Thursday with a different agenda, arguing the 12-week term is achievable if the Dáil sits in Christmas week.

She told the stricken TDs that, as Christmas is on Sunday this year, they could easily sit on the Tuesday and Wednesday.

The committee said it would decide next week.

Speaking of traffic accidents, one of the big talking points of the Dáil’s first week back was the manner in which the Taoiseach appeared to throw his loyal supporter and Minister for Jobs, Mary Mitchell O’Connor, under the metaphorical bus on Wednesday.

Nobody saw that coming the previous night in Iveagh House.

The Mitchell O’Connor mystery has everyone wondering. Ministers and taoisigh fall out, but they have their quarrels behind closed doors.

In public, they back each other to the hilt.

Over the years, Enda Kenny, in common with his predecessors, has stood in the Dáil and talked up, down and around awkward questions.

He doesn’t give in under opposition pressure to criticise a party colleague’s decisions.

And it’s almost unheard of for a Cabinet Minister (who isn’t embroiled in a scandal) to be so publicly cut adrift by the party leader.

It seems Minister for Finance Michael Noonan and his people in his department were not pleased when Mitchell O’Connor’s people put a story out that reduced taxes for Irish graduates returning from abroad to work here are under consideration.

What was seen as an ill-considered solo-run by the inexperienced jobs Minister in the difficult pre-budget period was not welcome.

So at Leaders’ Questions on Wednesday, when Micheál Martin derided the proposal as “bananas” and asked if it was being seriously considered, the Taoiseach agreed it was a total non-runner.

Even the Fianna Fáil leader looked taken aback by Enda’s clinical takedown of his own Minister.

Perhaps the Taoiseach was sending her a message to up her game. If so, he chose a brutal way to do it.

How Brussels’ appointee got rid of protesting farmers

Diplomats were out in force on Thursday night at the farewell bash for Dubliner Barbara Nolan, who is returning to Brussels after six years at the helm of the European Commission’s Irish outpost.

Warm tributes were paid to the woman who took office just before Olli Rehn blew into town with shock news of an EU takeover and introduced a shocked nation to the Troika.

Guests at the event in the commission’s new headquarters on Lower Mount Street included Catherine Day, who stepped down last year as general secretary of the commission and Peter Power, Commissioner Phil Hogan’s chef de cabinet.

Barbara recalled some of the highlights of her time here, including repeated Irish Farmers’ Association (IFA) protests and overnight occupations of the EU office.

She dealt with these inconveniences by various means – switching off the heat on one occasion; locking the doors when all the farmers headed off for food (doh!) and replacing the plush carpets with lino so the floor would be more difficult to sleep on.

But her most effective tactic was telling protesters if they didn’t leave immediately they would face the wrath of an ICA (Irish Countrywomen’s Association) delegation due to arrive any minute. The farmers fled.

Bryan Barry, acting chief of the IFA, listened with great interest. The stories will have been familiar to veteran eurocrat, Gerry Kiely, of Killenaule, Co Tipperary who takes over the job today. In the distant past, Gerry was an IFA official.

A simmering disagreement between Social Democrat TD Róisín Shortall and a group of Senators who are angry at their exclusion from the special health committee she chairs looks set to be resolved in the coming weeks.

The Committee on the Future of Healthcare was established in June and its aim is “to achieve cross-party consensus on a single long-term vision for healthcare and the direction of health policy in Ireland, and to make recommendations to the Dáil”.

It was set up after a Dáil motion from Shorthall in May, which was then supported by the Government.

The programme for government had promised to set up an all-party Oireachtas committee to develop a 10-year plan for the health service.

Because the 32nd Seanad was not yet in operation, the motion was only in relation to TDs.

But as soon as it was established, members with a particular interest and expertise in the health sector requested that senators be nominated to the committee.

They include: Fianna Fáil’s Keith Swanick, who is a GP; John Dolan (Independent) who is a disability campaigner; Sinn Féin’s Máire Devine, who has worked in the psychiatric services; and Collette Kelleher, chief executive of Alzheimer’s Ireland.

Fine Gael’s Colm Burke, who attended all but one of the health committee’s meetings during the previous government, has met and corresponded with Shorthall on the issue.

However, the Dublin North West TD says it is not now possible to include Senators on the committee as it has already done a lot of work (five meetings in July) and it’s too late now for them to join up. Furthermore, it’s big enough already, with 14 members.

Burke says he has the full support of the Fine Gael parliamentary party. Chief Whip Regina Doherty intends to bring a motion next week to amend the standing order which set up the committee.