Minister for Health Simon Harris TD has survived a Sinn Féin motion of no confidence by 58 votes to 53. Video: Oireachtas TV 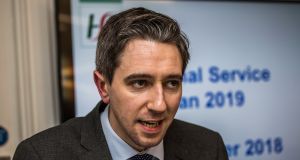 Leo Varadkar and Simon Harris settled into their front bench seats as TDs trickled into the chamber for the big debate.

Sinn Féin had moved a motion of no confidence in Harris as Minister for Health, who wore a worried expression, his face pale and pinched – which is the way he looks all the time. The Taoiseach produced a stubby roll of Polo and offered his colleague a mint, then popped one into his own mouth.

They sat back, sucking their sweets, while Sinn Féin’s Louise O’Reilly opened the debate on behalf of her party.

She concentrated mainly on the stated subject of their motion, but it didn’t take her long to start throwing shade at the real object of the exercise: Fianna Fáil. At one point in the party’s political pile-in, there was even an impassioned call for the resignation of Micheál Martin.

The Fianna Fáil leader wasn’t even in the chamber.

It was well over an hour into the proceedings before Labour’s Alan Kelly stood up, folded his arms across his chest and declared: “This has to be, in the history of this Dáil, the most bizarre no-confidence motion ever.”

He wasn’t wrong there.

There was a big government turnout for Simon Harris, with most of the Cabinet mustering in a show of support for their colleague. Former minister Francis Fitzgerald sat directly in front of her erstwhile political protégé, while Minister for Public Expenditure Paschal Donohoe – a man with more than a walk-on part in the current controversy over the cost of the national children’s hospital – also lined out for the team.

As Sinn Féin TDs queued up to justify moving their sixth Dáil motion of no confidence in three years and their pile of straws and broken-backed camels grew, Louise O’Reilly set the tone by explaining they were not willing “to stand on the sidelines and let the Government off the hook . . . unlike the men and women of Fianna Fáil”.

Her party leader agreed, following the pattern of the evening by attacking the Minister for Health and the Government for the state of the health service before rounding on Fine Gael for protecting its man and Fianna Fáil for protecting Fine Gael.

“Sleeveen politics is now the order of the day in Fianna Fáil.”

Mary Lou McDonald was followed by her colleague John Brady, who began with a quote from his fellow Wicklow TD and FF spokesman on health, Stephen Donnelly.

They were chuckling among themselves on the Fine Gael side as Brady bellowed “It’s up to Fianna Fáil to put up or shut up.”

But then, even the Fianna Fáil TDs were sniggering. “Fightin’ talk,” giggled Anne Rabbitte.

The FF bashing continued from Sinn Féin, from Caoimhghín Ó Caoláin through to Donnchadh Ó Laoghaire and, gloriously, to Martin Kenny, who started fulminating about Fianna Fáil scandals down through the years before delighting onlookers by calling for Micheál Martin’s resignation. As he was on his feet roaring, his colleague Martin Ferris was sitting a few rows behind him and also roaring, conducting a private shouting match with nearby FF TDs.

Then the Taoiseach spoke in support of his Minister for Health, saying he understands how difficult the job is, as he once held the position.

“You ran away from it yourself,” chimed Mattie McGrath and Michael Healy-Rae. That had TDs on all sides laughing. Leo then informed the House, for the umpteenth time, that he would be “turning the sod” on lots of wonderful projects in the near future.

Then he attacked Sinn Féin.

Simon Harris stood and spoke in support of himself. And then he attacked Sinn Féin.

There was a brief frisson when a strange man walked into the Dáil chamber and sat on the Government benches beside Minister for Enterprise Heather Humphreys until people realised it was Cork TD Dara Murphy, who spends most of his time in Brussels on FG business.

As Harris got stuck into Sinn Féin, with the clunky “to the ballot box and Armalite they have added the soap box and no-conference motion” and references to the party walking away from their responsibilities to the Department of Health in Northern Ireland, his colleagues grunted and snorted in appreciation.

Simon Coveney stood and spoke in support of the other Simon. And then he attacked Sinn Féin.

“And you’re keeping them there!” whooped Sinn Féin’s Stephen Cullinane.

After refusing to take seats in Westminster and bringing down the Northern Ireland Executive, Donnelly countered that Fianna Fáil wouldn’t “let you complete the hat-trick” by bringing down the Irish Government too.

As Sinn Féin continued to niggle its opposition rivals, Donnelly’s colleague, Mary Butler, shouted “Is this a motion of no confidence in the Minister for Health or in Fianna Fáil?”

Meanwhile, Barry Cowen was so annoyed with the Sinn Féin attacks that he wasn’t his usual articulate self when attempting to hurl a few verbal spears. He ended up by imploring the Minister for Health to “pull up your socks”.

The only bit of drama was when dissident Soldier of Destiny John McGuinness rose to speak. Would he denounce his party for supporting the Government and refuse to toe the party line by abstaining in the vote? Well, he would have voted no confidence in the Government but he wouldn’t do it to an individual Minister. But he wants an “orderly wind-down” of the Government after Brexit is sorted. Whenever that might be.

“I actually don’t know any more why we support you,” he boomed, as a very serious-looking Marc MacSharry nodded gravely in the adjoining seat.

Then the Leas Ceann Comhairle halted proceedings briefly to welcome the Maltese Minister for Foreign Affairs to the Distinguished Visitors Gallery.

Meanwhile, Mick Wallace, nonplussed at how the contract for building the children’s hospital came about, wondered if Ireland wasn’t more dysfunctional than Venezuela. He found the whole episode demoralising.

“This afternoon’s political theatre, from all sides of the House, has been utterly demoralising,” added Clare Daly.

All rather pointless. And doing nothing to improve anybody’s health.