Speaking during TV3’s leader debate, Micheál Martin said the Taoiseach had a "brass neck" to claim success in the area of health, claiming its policies and performance have been a disgrace. Video: TV3 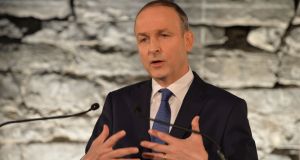 Micheál Martin: Doggedly insisted he’s still in the fight for the top job. He says he’ll be putting his name forward for taoiseach, when the time comes. Photograph: Alan Betson / The Irish Times

So there’s this man in a sharp suit talking earnestly about choice and fairness and “an Ireland for all.” His people have put together a comprehensive sales pack: speech, manifesto, independent costings, executive summary, promises of a bright future to come.

All the bumpf is placed inside a stylish presentation folder with the glossiest of glossy photographs on the front.

This full colour portrait of Micheál Martin – currently appearing on a lamp post near you – owns the entire cover.

Presumably in case people at the launch failed to clock his face looming over them from the mobile billboard parked outside. Or hadn’t opened their copy of the manifesto to see the full-page, full-length, super- soaraway shot inside.

No expense has been spared on Fianna Fáil’s election poster boy. If he was in the nation’s face any more than he is now, he’d be up in court on headbutting charges.

Perhaps the printers should just slap “tánaiste” across his forehead and be done with it. That’s a distinct possibility, if Fianna Fáil can stomach the thought of an unholy alliance with Fine Gael.

Micheál, meanwhile, doggedly insisted yesterday he’s still in the fight for the top job. He says he’ll be putting his name forward for taoiseach, when the time comes.

He’s very good, up there, fronting for Fianna Fáil. He does all the talking – sure-footed, relaxed and confident in his answers. A small group of freshly picked wallflowers – candidates, TDs and Senators – are arranged to his right, squinting in the television lights. They’re there for decorative purposes.

So you look up at the man Fianna Fáil has decided is their best shot at redemption, and you listen to his persuasive patter and you look down and that big glossy photo smiles back, and you begin to wonder if you might buy that second-hand car from him after all.

“Hmmm. This guy sounds very plausible. He has an honest face. I think we might give him a chance. . .”

And then. Oh, wait. Haven’t we been here before?

It’s a problem for poster boy Martin and he knows it. He has to get the sales pitch right and he knows what he has to say. Micheál is seeking absolution. Politicians don’t like to apologise. But sometimes they must.

In this election campaign, Fianna Fáil is offering itself to voters who unceremoniously booted the party out of office in 2011 for conduct unbecoming, leading to the economy’s collapse. The consequences hit hard. Back then, they swore they would never forget. It’s not that long ago.

And yet, one of the last remnants of that discredited government stands before them again and he’s doing better than okay – far better than anyone would have imagined five years ago. He is doing so well that he stands a very real chance of returning to power in some shape or form.

But where once there was hubris there must now be humility. As leader of Fianna Fáil, Martin knows he cannot ignore what has gone before. Like the returning property developers, he’s back in the game, but unlike them he can’t brag about it.

At yesterday morning’s launch he is asked why people should trust him, and his party, to be responsible. Look at that manifesto: is it not a return to Fianna Fáil giveaway politics that bankrupted the nation and crippled your party?

Denial is not an option, even if some still cling to the bitter view that they were the victim of international forces and bad timing. Acceptance is the only way to go.

Micheál knows what to say.

“We’ve taken our blame and we’ve acknowledged that we got things wrong in relation to spending too much and reducing the tax base to too low a level, but we’ve learned the lessons from that. The people passed their verdict in two-eleven [2011].”

Fianna Fáil has taken its medicine. They are different now.

“We’ve learned our lessons from that,” says the new glossy face of Fianna Fáil.

“And that is why we have a very prudent and affordable plan.”A “fully costed” plan that shows their promises are not just pie in the sky.

All the parties are playing the “fully costed” card. Sinn Féin are positively singing it. But Fianna Fáil has found a new twist.

Everyone else looks to the Department of Finance to stand up their extravagant claims. “Parties always fall back on the phrase ‘It’s been fully costed by the department’ without showing what has been costed and how,” said Micheál.

Fianna Fáil, however, has gone over to London, no less, for independent verification. They asked an independent economics research consultancy to do up a report.

They ran the rule over the FF promises and found them to be “reasonable”.

This is important for a party which wants to return to government. Quite how is the question, and one Martin was not willing to answer yesterday. He’s not saying what the party might do when the votes are counted and is rather affronted by the prevailing commentary that Enda Kenny is “a shoo-in” for taoiseach. He’s not hearing that on the blessed doorsteps.

But he’s also unwilling to rule out a grand coalition with Fine Gael. That’s all hypothetical stuff and Micheál is “getting into hypothetical scenarios at every single press conference”.

He delivered a good performance. But whoever chose the location for the launch was very brave, given Fianna Fáil’s tarnished relationship with the construction industry.

It was in the beautiful Wood Quay venue, and Micheál stood in front of the reconstructed ruins of Dublin’s ancient city walls, the handsome bricks numbered by archaeologists.

Wood Quay, where over 20,000 people marched in 1978 in protest at plans to build new civic offices over the priceless remains of the city’s Viking past.

Fianna Fáil was in its pomp then.

There will be no absolution for that episode of destruction.

Poster boy Micheál will find out soon if it comes for him.