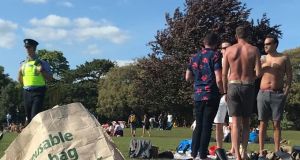 An image shared on social media at the weekend of Taoiseach Leo Varadkar and his partner Matt Barrett meeting two friends in the Phoenix Park in Dublin.

Leo Varadar is due in the chamber at midday on Wednesday for his first Dáil appearance of the week. It is likely to be his only one because the following day’s schedule has been cleared for a six hour mega-romp with Paschal Donohoe through the revised Social Protection estimates.

After the usual formalities, the Ceann Comhairle, who has a nice sense of humour, will commence proceedings.

In an ideal world, here’s the way it should happen:

“I call the Taoiseach. Taoiseach?”

And Leo will rise to his feet.

A perplexed looking Seán Ó Fearghaíl will raise his voice.

“I call the Taoiseach?”

Leo will cough discretely into his elbow to announce his presence and the Ceann Comhairle will respond.

“If it isn’t yourself, Taoiseach, sure I didn’t recognise you with your clothes on. Get it all off your chest now.”

But this is no laughing matter.

The switchboard in Government Buildings must have been jammed with people ringing up to complain about those photographs of Leo Varadkar and his partner brazenly showing off their Phoenix Park pecs at the weekend.

When The Irish Times contacted the Taoiseach’s office on Tuesday afternoon a spokesman stated the incident “hasn’t been an issue” as far as complaints are concerned, which is a matter for concern. It seems people are so shocked and livid they haven’t even been unable to ring Joe Duffy.

The snaps surfaced on social media on Monday and since then we have been doing all we can to link the Taoiseach’s relatively harmless interpretation of Ireland’s lockdown rules to the seriously shabby case of Dominic (Drive Back and Lie for England) Cummings and his boss Boris (Lockdown and Lie for England) and their blithe disregard for them.

The two episodes are not remotely the same.

For starters, the Taoiseach may be  bare-chested but he’s in charge whereas the British prime minister is a titular head. Leo likes to remove his shirt. Boris is a martyr to his trousers.

Cummings, the PM’s Special Advisor who transgressed the stringent lockdown rules he promoted, is the one in charge and he keeps his clothes on.

Leo had a picnic in the park with his partner and two friends on a hot summer’s afternoon on his day off. He took off his top and had a lie down on the grass. This was not in keeping with the stern advice issued days earlier by a Government spokeswoman recommending that people could take the air and meet in groups of four if observing social distance rules , but not linger together for picnics or that sort of thing.

The Taoiseach followed the rules, almost to the letter. The picnic was questionable. It was a very public display. There was a blanket on the ground and a wicker basket. One newspaper reported that the Taoiseach held a cup in his hand. Others said he was holding a can. Perhaps there was a bag of cans in the wicker basket.

He will have been well aware of curious eyes all around, watching him. Many people were similarly sunbathing, camera phones in reach. He knew somebody would take a photo of him and knew there was every chance that some of them would end up on the web.

But Leo also knew that, apart from that wicker basket, he was not breaking the restrictions. He enjoying himself within the distancing requirements and showing off too. Taoiseach Leo - Little Lord Flauntleroy. Because he can.

Dominic Cummings did not have a picnic in the park but he had a walk in the park, although not in the true sense of a walk because while he was putting one foot in front of the other, he wasn’t technically walking because that would have been breaking the rules.

He did scarper 260 miles from his home in London with his wife and young child - both adults possibly infected with Covid-19 - driving to his parent’s farm in a lovely picturesque part of England as colleagues in Downing Street were keeling over with the virus.

But he has argued that was allowed legitimately because he was acting in the interests of his child, even though that clause was expressly brought in by his government to help parents escape with their children from domestic violence situations.

Cummings was spotted making little excursions in his coach and four while in Durham, including tootling like Mr Magoo to a distant beauty spot because he says he needed to gauge if his dodgy eyesight would allow him to convey his family back to London. (His wife can also drive a car which would have obviated the need for her hubby, and on her birthday as well, to possibly blunder dangerously along the public road to a popular tourist destination in the midst of a pandemic.)

He flouted the rules.

Then the titular PM flaunted his flouting of the rules. Crazy stuff.

Nothing like that here. We’re only in the ha’penny place compared to what’s happening across the water and that’s a relief.

In the meantime, the official Cabinet Handbook is being urgently reprinted to emphasise that ministers may only be shirtless for New Year, Christmas and Think-In swims.

A topless Taoiseach and a provocative picnic.

Will the Dáil let him away with it or will they want to discuss Leo’s al fresco fiasco when the House reconvenes?