Miriam Lord: Leo keeps it brief for last speech before Dáil packed with about 11 people 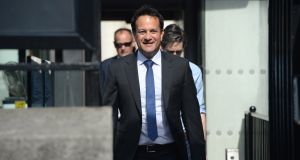 File photo from June 15th Leo Varadkar on one of his last duties as Taoiseach. Photograph: Dara Mac Dónaill

Such poignant scenes in the Dáil chamber on Wednesday afternoon.

Leo Varadkar faced the Opposition for the final time from the Taoiseach’s seat (at least until December 2022). Barring an upset on Friday when the results of party votes on entering government are revealed, the next time he appears in the chamber somebody else will be doing the job.

It was very moving.

A packed Dáil – as many as 11 people crowded the benches for Varadkar’s last stint in the House as head of Government – witnessed his touching farewell. Or it might have been touching, had it not been for the social distancing.

After delivering a short speech on the recent remote meeting of the European Council, the departing Taoiseach was so despondent he could scarcely lift his eyes from his mobile phone. Next time he sits on the government benches, it will be as a lowly tánaiste and minister.

There wasn’t a dry seat in the House, possibly due to the bouts of extreme disinfecting which now precede and follow every two-hour sitting.

A harsh background noise of weeping, gnashing of teeth and rending of garments punctuated the air of wistful contemplation. But this sound didn’t emanate from Leinster House. It was coming from the Green Party – days away from (possibly) entering government during a climate emergency having survived near annihilation in the general election four years ago and now marking this milestone by taking lumps out of each other down the road in its Suffolk Street HQ and beyond.

The only indication in Leo’s speech that he is moving to another staging post in his political career came at the end of his statement on last Friday’s video conference with fellow EU heads of state.

“I also took the opportunity to thank the leaders for their friendship and solidarity with me as Taoiseach, and with Ireland as a country over the past three years, particularly when it came to Brexit. I wished them well in the difficult and challenging days ahead.”

Listening to him from across the floor was the Fianna Fáil leader Micheál Martin, who is set to swap roles with Leo at Saturday’s special Dáil on the Docks session in Dublin’s Convention Centre. How Micheál’s heart must have soared when he heard the Taoiseach report that the main focus of discussion at his meeting had been “the commission’s proposal of an EU-wide recovery instrument, known as Next Generation EU, and the EU’s seven-year budget for the period from 2021 to 2027, the multi-annual financial framework, MFF”.

But he managed not to look thrilled and instead made a much longer speech than his soon-to-be predecessor. That big office in Merrion Street is within touching distance for him now. Who would have imagined it back in 2011, when the once mighty Fianna Fáil party lay in flitters with Micheál Martin one of the few to limp from the wreckage?

Around Leinster House, Fianna Fáil TDs nursing hopes of some class of job in the new government were warm in their praise for their leader.

“To be fair to him, he stuck with it when most of the big-wigs abandoned ship,” said one. “He could have left and made a fortune on the international lecture circuit.”

“Oh yes. In huge demand as the politician who brought in the world’s first smoking ban. That’s his USP. It’s still a great calling card.”

The Fianna Fáil leader didn’t mention the domestic state of play in his statement and we have been unable to confirm reports that he flung a roll of black refuse sacks and a Leap card at Leo as he was exiting the chamber for the last time as Leader of the Opposition.

Micheál is unlikely to remain as FF leader once the job of taoiseach is rotated on.

There is relief around Kildare Street that negotiations on government formation concluded with enough time to return the meeting rooms in Agriculture House to their recent Covid-19 repurposing as the headquarters of the National Emergency Co-ordination Centre before the next crisis.

And in the nick of time too – for that crisis is upon us.

As the countdown to the Apotheosis of Micheál continues, a state of emergency has been declared in Cork because it looks like the Real Capital may have its own taoiseach again after a gap of over 40 years.

They may have to bring in the army to control the overwrought crowds.

Meanwhile, the Taoiseach left the chamber looking very relaxed. They should check the ledge at his seat to make sure he didn’t carve his initials on the underside.

Before leaving Leinster House he locked the Ceann Comhairle in a toilet, threw water bombs at the Captain of the Guard and put shaving cream in Mary Lou McDonald’s handbag. Back in Government Buildings, he set fire to his all briefing notes and then drank the sherry in Heather Humphreys’ emergency hipflask.