Miriam Lord: Leo comes up with a reply to put fear of God into everyone

Taoiseach Leo Varadkar has said that the Irish Government "profoundly regrets" the House of Commons vote on the Brexit bill. 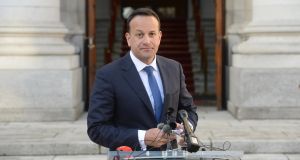 ''The UK has given its word that Brexit would not result in a hard border between Ireland and Northern Ireland,' said Taoiseach Leo Varadkar, sounding every bit as innocent as Winston Churchtown had the night before.' Photograph: Dara Mac Dónaill

The people versus Leo and Simon:

What if the UK crashes out without reaching any Brexit agreement with the EU? What happens then?

What happens to the Irish Border and the belt and braces backstop?

Leo Varadkar and Simon Coveney are in the Dáil, eyes closed, fingers in their ears, humming loudly while jumping up and down on the spot.

Micheál Martin and Mary Lou McDonald are trying to get a simple answer to a simple Brexit question. The two know what it is, as does everyone else in the country with half an interest in the Brexit debacle. But they need to hear it from the men in charge.

Except the Taoiseach and Tánaiste don’t want to say anything about what will happen in the event of a no-deal Brexit. They can barely countenance such a development – at least not in public, although the time for being coy is well gone.

They could probably cite commercial sensitivity or the national interest for their reluctance to enlighten, but it seems the reason for their reticence is informed by a far more base motive than might be imagined. Tánaiste Coveney let it slip on Tuesday night when a private exchange he had with Shane Ross after a press briefing was caught on tape.

Poor Shane (aka Winston Churchtown). The Minister for Transport had given an honest answer during that briefing on “contingencies” in the event of an undesirable outcome. They will be triggered if “a disorderly Brexit” tries to prove how hard he is by challenging Brussels to a fight before staggering out of the EU in search of a forever kebab, never to return.

This is not beyond the bounds of possibility.

Winston had been asked if a post-disorderly Brexit truck travelling from Scotland through Northern Ireland could cross the Border without any customs’ checks. “I would anticipate there would be checks,” he replied.

This was the right answer, but not the politic one. Coveney smoothly intervened. “If Britain leaves without a deal, well, then we obviously have to have difficult discussions with the European Commission and with the UK in terms of how we protect the EU single market.”

But no mention of the Border, whose fate is of huge importance.

Afterwards, innocent Winston knew he had displeased the Tánaiste. “The Border one, should I not have said that?”

Simon told him a few facts of life. Customs posts on the Northern Ireland Border? A very sensitive subject. Obviously, there will have to be checks. “But we can’t get into where they’ll be at this stage. They could be in the sea, they could be... But once you start talking about checks anywhere near the Border, people will start delving into that and all of a sudden we’ll be the Government that reintroduced a physical border on the island of Ireland.”

And we can’t be having that.

It sounds a bit paranoid. His Government will do all it can do to lessen the impact if the UK leaves the EU, but the manner of that departure and the inescapable consequences are outside of its control.

Leo Varadkar and his administration, after all their efforts, can’t be blamed if the UK crashes out, leaving a gaping hole in the EU customs fence which will have to be policed.

During Leaders’ Questions, the tete-a-tete between the Tánaiste and his Minister was raised by Micheál Martin, who couldn’t see any reason why the Government is holding back on telling the public how a hard Brexit will affect the Irish Border. That caught on tape conversation was “deeply worrying” and you couldn’t blame anyone for thinking “the public are not being told the truth for party political reasons”.

The Fianna Fáil leader was so struck by the determination of the Taoiseach and his Ministers to avoid broaching the issue of Brexit and the Border he likened it to a famous episode of Fawlty Towers. “Whatever you do don’t mention the war, but somebody forgot to tell Mr Ross.”

The leaders of Fianna Fáil and Sinn Féin leaders merely wanted to know what the Government intends to do about the Border if the UK crashes out of Europe in March without a deal. Because there isn’t one in place yet, the clock is flying down to departure day, and the British politicians who are supposed to sort it have lost their marbles.

Instead, the Taoiseach, with his rather tired-looking Tánaiste and Foreign Minister in the chamber with him, preferred to talk around the issue. What people don’t know won’t spook them.

Except they already know.

The Taoiseach revealed a daft notion that he fears voters might think his Government is hatching some sort of “secret plan” for the return of a hard border if he tells the truth on what a hard Brexit might bring. Because that would be the popular thing to do for a man hoping to win the next election.

Mary Lou McDonald demanded to know the missing emergency measures for the border.

“What is the contingency plan for that? Because make no mistake about it, Taoiseach. As sure as night follows day, if there is a crash, if there is no backstop, a hardening of the Border follows automatically. And what will you do?”

For somebody who has decided his Government should say nothing at all about what a disorderly Brexit will mean for the Border in case it frightens the horses, he came up with a reply which put the fear of God into everyone.

“The UK has given its word that Brexit would not result in a hard border between Ireland and Northern Ireland,” stated the Taoiseach, sounding every bit as innocent as Winston Churchtown had the night before. The UK will sort it.

“They have to honour it now,” declared Leo, filling the chamber with confidence. Britain, having rejected the solution of the withdrawal agreement, must come up with “an alternative solution”.

He then proceeded to shoot down his own proposal.

No wonder the Tánaiste meant on Tuesday morning “We must hold our nerve.”

If they have any nerves left to hold.