Miriam Lord: How about a few awards to lighten the campaign mood?

The marriage referendum created some new heroines as clowns played on 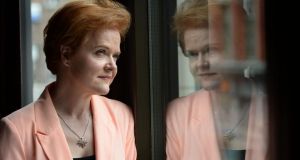 Nobody was thinking of the chickens yesterday. Waving their optimistic little wings from the corner. Begging to be counted. But universally shunned.

They had crossed seas and oceans. Flown in. Sailed in. Shelled out for tickets, borrowed bicycles, cadged lifts. Gotten out of bed early, for heaven’s sake. Look at us, they demanded with their smiling selfies. We are here, we are home and we are hatching. Count us!

Those who dared, drew hope from the happy influx. Most looked the other way, too scared to start dreaming that, from today, their country could be proudly redefining what it means to live in Ireland of the Welcomes.

They resolutely refused to talk positively about the result, despite encouraging reports of queues outside polling stations and all those bittersweet photographs of young professionals on planes and students boarding buses with rucksacks full of dirty washing and hearts full of hope.

“We are not counting our chickens yet,” was the sensible mantra throughout yesterday’s futile exercise in expectation management. As if it might lessen the hurt if the amendment on same-sex marriage is rejected. But of course it won’t.

Too much emotion has been invested now and too many families and individuals have laid bare their private lives in front of hemming and hawing strangers. The country is changed,one way or the other, but defeat would be devastating. Yesterday was the longest day. We shall see.

In the meantime, how about a few awards? They always lighten the mood.

Politicians of the Campaign: Labour’s Minister of State for Equality Aodhán Ó Ríordáin (and his controversial lapel pin) worked tirelessly and deserves honourable mention. He may, however, need specialist treatment for his worsening selfie addiction, which reached alarming proportions as the weeks progressed.

Enda Kenny, to be fair to him, grew in strength and confidence as the finish line approached, although he didn’t sound overly keen about being described as a gay icon at his final press conference, despite his fondness for reminiscing about the time he visited Panti Bar.

Joan “Dusty” Burton was equally strong and she put in a lot of hours travelling around the country addressing Yes campaign meetings. Asked where she stands on the gay-icon question, she modestly dismissed any such notions but revealed that some people were comparing her to Dusty Springfield when she wears her pink jacket.

Mattie McGrath, or “Mothers and Fathers Mattie” as some were calling him, was a stalwart for the No side. He deserves a gong for revealing a hitherto unknown proficiency in constitutional law in his opinion piece for this newspaper. Had his name and photograph not been at the top of the article, you would have sworn it had been written by a learned senior counsel. His command of legalese had us rushing for the dictionary. Who’d have thought it?

But our Politician of the Campaign award goes to Fianna Fáil’s Senator Averil Power. She did Trojan work, even paying for leaflets out of her own pocket, while the majority of her parliamentary party did nothing. Some of them jeered and heckled when she asked them to get out and campaign. These same seat-squatting sleeveens in suits hadn’t the backbone to say which side they supported. Should the amendment be carried, Micheál Martin and his small progressive wing should send a few rockets in their direction.

The Usual Suspects Award: Out of the traps with predictable speed were Senators Rónán Mullen and Jim Walsh along with the indefatigable defenders of old Catholic Ireland from the Iona Institute, led by David Quinn and Breda O’Brien.

Where would we be without them?

Hardest Worker of the Campaign: There can only be one winner here, and it’s the RTÉ stopwatch. Were interviewers trying to prove how ridiculous the rule requiring absolute balance is by timing contributions down to the second? And balance, by the way, doesn’t prevent the asking of tough questions or the calling out of deliberate distraction and misinformation.

Mammy of the Campaign: Former president Mary McAleese is in line for one of these, but she has more than enough awards. Breda O’Brien of the Iona Institute merits an award for bringing up (and home-schooling) a son, Ben Conroy, who is a very impressive debater. Conroy is a Trinity College Dublin student set to go to Oxford shortly, and is a young man who knows how to marshal a defence.

But the award goes to Josie Lyons, from Finglas, mother of Labour TD John Lyons, who made a wonderful video about her son. (When he tried to break the news to her that he was gay, she thought he was going to tell her he’d got a girl pregnant.) It’s well worth a look for a woman who, when John hit the headlines as an openly gay TD, “walked out of Tesco with me head held so high I nearly broke me neck”.

Una Mullally Award for Bravery: This goes to Ursula Halligan, whose decision to come out before the final week in a heartfelt and intensely personal article in The Irish Times, had a big effect on the campaign. She can’t walk down the street without people hugging her and bursting into tears. “I can’t believe I’m doing this,” she kept saying before making her decision to go public. “I can’t believe I’m telling everyone I’m 54.”

The Ursula Halligan Award for Bravery: This goes to my fellow Irish Times journalist Una Mullally. Her efforts, along with others, to advance the cause of gay and lesbian equality reached a peak with the referendum. At the same time, Una (32) was diagnosed with cancer. She is battling through and was still fighting for a Yes vote as the polls closed yesterday.

The Gate Theatre Award for Male Dramatic Leads: This one goes to veteran journalist Bruce Arnold, who declared on radio that gay people didn’t have such a bad time of it back in the Ireland of the 1950s and 1960s when homosexuality was outlawed. To bolster his argument, Arnold instanced two celebrated theatricals and remarked: “I remember particularly Micheál MacLiammóir and Hilton Edwards strutting through St Stephen’s Green, hugely admired and known as a gay couple.” Which brings to mind the old story of how Dublin’s hard chaws would shout at the two as they ostentatiously strolled around the green: “Hey, youse two, would yis ever get effin’ married.”

And MacLiammóir would reply: “Love to, dear boys, but one of us is a Catholic and the other is Protestant.”