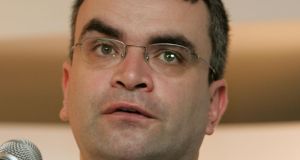 Brexit is all very fine, but the people of Belgooly are being held to ransom.

The Tánaiste and Minister for Foreign Affairs may be preoccupied with the multifaceted fiasco unfolding in Westminster, but some issues can never be ignored.

With the Taoiseach in Paris on a Brexit-related mission, Simon Coveney stepped in on Tuesday to handle Leaders’ Questions and any exodus-related concerns the Dáil might have. He could have told TDs everything they wanted to know, but unfortunately would then have had to shoot them. Had he screwed on a silencer few would have noticed.

“We need to be very careful about what we say here because accuracy is important,” Simon said carefully in his devil-may-care cautious Coveney kind of way.

When it comes to divulging details of the Government’s post-Brexit plans, the Tánaiste adheres to the gospel according to Ronan Keating. He says it best when he says nothing at all.

But he could not remain silent on the status of the Belgooly water supply, which was brought to his attention by Fianna Fáil TD for Cork South West Margaret Murphy O’Mahony.

“I attended a meeting there on Friday night, and it was one of the main topics of conversation. Tánaiste, the people of Belgooly are being held to ransom waiting for a commencement date for this scheme” she told the Tánaiste, who represents the constituency next door. “They have to change their domestic appliances much more often than any of the rest of us, and it’s not fair.”

As far as the village is concerned, all the preparations for the new water have been completed. Was there a reason why it was not up and running when “all ducks are now in a row”? Very familiar

No hesitation here from the Tánaiste. “I’ll certainly be checking to make sure all ducks are in a row. I know Belgooly very well – it’s right on the edge of my constituency. I’ll try get an answer for you, Deputy. It’s probably unreasonable to expect me to have a date in my head here on my feet, but I am very familiar with Belgooly, and I will certainly come back to you with an answer on that.”

We thought of Michael Healy-Rae, and his oft-repeated gripe about what goes on in the Dáil chamber.“It’s all Dublin, Dublin, Dublin!”

Simon wasn’t the only deputy on duty. Dara Calleary was deputising for the leader of Fianna Fáil, who wasn’t in Paris. We were told afterwards that Micheál Martin was otherwise occupied in Dublin at meetings and such-like.

Pulling that old “do you not know who I’d like to think I’m going to be?” trick.

Dara continued with the conspiracy line rolled out in the last few weeks by his boss. He greatly suspects, going on clues such as multiple mentions by the Taoiseach of meetings with European leaders and high-sourced officials in the EU Commission, that the Government has A Plan ready to go in the event of a hard Brexit.

“We need to see, you need to share that detail, to involve us in the planning of that detail,” demanded the Fianna Fáil second in command of the Government’s commander of the contingency forces. To make things easier, he told Coveney that the Dáil doesn’t need to hear “your entire negotiating strategy”. Just the key principles would do.

But Simon was determined to keep schtum.

While the Government was working hard to be withdrawal-ready and was about to “intensity” discussions with its partners in Europe over how best to respond in the event of a hard Brexit, nothing has been decided. Preparations were at an advanced stage should the worst happen.

“Of course, we hope that won’t be the case, but this country needs to be ready if it is.”

Everyone in Dáil Éireann wanted to help out with the withdrawal effort, but “we need the information”, argued Dara.

Answer there came none.

“Hope is not a strategy,” added Calleary, clearly forgetting that there is a general election sometime soon in the offing, and hope will be springing eternal in the ranks of Fianna Fáil.

He wanted Coveney to come clean, say what’s going on and let the Irish people know the detail of the plan.

“It’s not,” insisted the Tánaiste. “Difficult conversations” were taking place, but that was all. They were working out a plan with the commission, which was a different thing.

Dara was not convinced.

“I presume, Tánaiste, the Taoiseach and President Macron aren’t discussing their Kylie collections.”

Maybe they were, because they weren’t discussing what Fianna Fáil is insisting is being discussed above the heads of the Irish people.

Simon was getting exasperated. How many times did he have to say it?

“The Government is not hiding anything from anybody,” he insisted. “There isn’t a plan.”

It’s not what you usually hear from a politician in Leinster House – a frank admission they have no plan. But the Tánaiste needed to be very clear: the Irish Government was not going to Brussels as of now with a plan. In fact, the plan is that there is no plan.

Simon assured everyone that as soon as one emerges, the Dáil would be the first to know.

Later on Catherine Murphy of the Social Democrats wanted to talk about another plan. She reminded Coveney the Taoiseach warned that the National Broadband Plan might not proceed in the event of a no-deal Brexit. Has the Government factored this to its final bill for broadband, which is already expected to cost an arm and a leg?

The Tánaiste declared the Government was leaving nothing to chance in this regard. “So we’ll be making a decision with our eyes wide open on cost.”

Which is the truth. When that total is presented, eyes will most definitely be wide open.