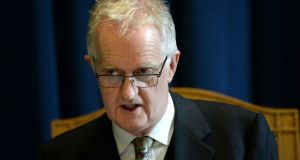 The tribunal, chaired by Mr Justice Peter Charleton, was obliged to publish an interim report after 20 days of testimony. Photograph: Dara Mac Dónaill

The Charleton Tribunal, which is examining the treatment of whistleblowers, has set out a schedule of public hearings for the second half of the year.

In its first interim report, published last night, the tribunal said its first public hearings would begin in July, examining contacts between journalists and An Garda Síochána over whistleblowers’ claims.

It said Garda Commissioner Nóirín O’Sullivan and her predecessor Martin Callinan had both signed documents waiving any privilege they might have in relation to any allegedly confidential communication with the journalists.

However, it said, a number of journalists which the tribunal had contacted declined to follow suit.

“Some journalists have given witness statements in which they have helpfully specified conversations that have taken place outside of what they perceived to be the cloak of any such privilege, if it exists. Others have refused to say whether there is any relevant testimony which they might offer. The extent of privilege and the circumstances under which it arises are both likely to occupy time,” the report says.

It added the tribunal had made an opening statement on February 27th calling for immediate cooperation from all interested parties and witnesses by a particular date, which was two working weeks thereafter.

“There were many useful pieces of correspondence received, including from concerned members of the public, though the general level of response was very disappointing.”

The first hearings in July will examine records which had circulated within health service agencies that contained false allegations about Garda whistleblower Sgt Maurice McCabe.

The first hearings will also examine whether those records where then used by some in the Garda against Sgt McCabe.

The tribunal, chaired by Mr Justice Peter Charleton, said the alleged mistreatment by State agencies of another whistleblower, Garda Keith Harrison, would be the subject of public hearings in September.

And in November the issue of whether senior Garda members briefed against Sgt McCabe, to the media and politicians, will be dealt with.

Hearings on the alleged influence of Ms O’Sullivan over a report broadcast by RTÉ in May 2016, will follow.

In December, the tribunal will examine whether false information about Sgt McCabe was relied upon by Ms O’Sullivan during hearings of the O’Higgins Commission last year.

The tribunal was obliged to publish an interim report after 20 days of testimony had been heard. That point has now been reached, though the evidence to date has been heard in private.