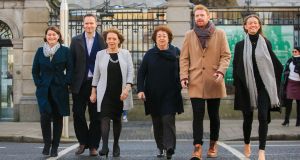 It takes a while to turn a ship of state around.

The new TDs are arriving and the former deputies are moving out. It’s a slow process – most of them have a lot of baggage.

Senators not contesting the forthcoming election for the Upper House are also packing up.

Incoming members of the 33rd Dáil must sign a register before they are deemed legit. “If you don’t sign on you won’t get paid. The meter starts ticking then,” explained an old hand.

Members from Fine Gael and Fianna Fáil are rambling in by appointment and getting sorted. For others, it is a more significant occasion.

On Wednesday, the delighted Social Democrats gathered at the gates for a photocall. For the foreseeable future, the six of them will have to endure being described as “the newly-enlarged Social Democrats” even though it’s trim and fit they all look after four gruelling weeks on the trail.

Co-leaders Róisín Shortall and Catherine Murphy were glowing with success. They tripled their party’s Dáil representation and marched down the plinth with their new parliamentary colleagues looking ready to take on the world.

After that, they held a meeting in the Royal Irish Academy down the road in Dawson Street. “We are just back from our first. . . Parliamentary. . . Party. . . Meeting,” beamed Róisín when they returned, emphasising the last three words to convey the full import of the event.

The SocDems were in high spirits, laughing and joking in the sun outside the front door. But as they savoured the dizzy heights of hitting the half dozen, a different group of newly-elected TDs were definitely not experiencing the joy of six. Minutes before the newly enlarged ones spilled outside, the freshly diminished Labour parliamentary party left the building for a press conference across the road in Buswells Hotel.

A terrible result for the party and leader Brendan Howlin and it was a very subdued six who faced the media. They were joined by outgoing senators Kevin Humphreys and Ivana Bacik, both of whom are hoping to return to the Upper House. At least Bacik’s presence took away from the fact that Labour’s entire Dáil contingent is now an all-male zone.

Journalists waited for Brendan to finish his speech, which was merely a prelude to their questions about how long could he continue as leader and when would he be falling on his sword. But they didn’t get to ask them.

Midway through his remarks, Brendan relinquished his command. There were no tears; in fact, it was one of the most relaxed and peaceful capitulations Leinster House has seen in a very long time.

After he outlined his party’s stance on participating in the next government (they won’t), he calmly declared he was stepping down.

No dramatic heave, night of the long knifes, grim-faced delegation presenting an ultimatum, no days of fevered speculation followed by sorrowful surrender and the rare opportunity to write “defenestration” in newspaper columns.

A most polite departure.

Where’s the fun in that? How dare they.

While Howlin is stepping down, he still retains his job. The picture is bleak for many staffers around Leinster House whose employment ended when their TD bosses lost their seats, Among them, about 40 parliamentary secretaries – many not aligned to a particular party.

Some are hoping they might be taken on by a new deputy – but that can’t happen until a government is formed, and nobody is taking bets on when this is likely to happen. “I’d say Sinn Féin will take their own people with them, so that’ll cut the amount of jobs going,” said one staffer glumly. There were tears in the canteen and the corridors.

Negotiations to form a government have tentatively started with the smaller groups calling to see Sinn Féin leader Mary Lou McDonald, who has been installed in the talks driving seat because her party won the popular vote by a good stretch.

Among them the members of Solidarity-People Before Profit. Before the election, PBP leader Richard Boyd Barrett said it was a real chance for voters to start a “political earthquake” and introduce the prospect of a real, left-influenced government for the first time.

Speaking outside Leinster House with Gerry Carroll, his MLA colleague who travelled from Belfast for the meeting with Sinn Féin, RBB said people laughed when he suggested a left-wing alternative was a real possibility but “now it is a real and living possibility”.

He put us in mind of that old Bob Monkhouse joke: “People used to laugh when I said I wanted to be a comedian. They’re not laughing now.”

Change has even hit the kitchens. Somebody on high in catering, perhaps spurred on by predictions that the Green Party would return with more TDs, decided that they needed to up their game in the vegetarian area

Richard was wearing his People Before Profit hat during his chat with Mary Lou. PBP’s three TDs retained their seats. Richard was not wearing his Solidarity-PBP hat, which is different. This is important. Later on, to avoid confusion on the millinery front, Solidarity issued a press statement.

“The meeting today is just a meeting of the People Before Profit component of Solidarity-People Before Profit.” Nothing to do with Solidarity. Solidarity has one TD, Mick Barry, who was wearing only the one hat, but may well be wearing two when the group holds a press conference on Friday.

Then Paul Murphy, who is also part of Solidarity-PBP but is part of a different organisation called “Rise” and therefore has three hats, got involved. Rather sensibly, Paul thinks everyone should wear all three hats at all times. It would be much more effective if everyone “seeks to agree a common position and seeks to negotiate that position with others”.

All five of them.

Hope that clears everything up.

Fianna Fáil leader Micheál Martin, who has one more seat than Sinn Féin, thanks to the Fianna Fáil Ceann Comhairle’s automatic return, kept a low profile. He may resume radio contact on Thursday after the party’s midday parliamentary party meeting. So too is Taoiseach Leo Varadkar, who was doorstepped at a business event in Dublin Castle and breezily declared Fine Gael would be going into Opposition and he would lead it and that’s that.

In this Change Election, it’s all change in Leinster House.

It has even hit the kitchens. Somebody on high in catering, perhaps spurred on by predictions that the Green Party would return with more TDs, decided that they needed to up their game in the vegetarian area.

Two weeks ago, a number of chefs were sent off campus to do a two-day intensive “vegan masterclass”. They learned how to prepare new dishes without milk and eggs and were introduced to all the new vegan and plant-based products coming on to the market.

The vegan sausages made their debut at breakfast this week, along with vegan sausage rolls. Butternut squash curry with tofu and spinach appeared at lunchtime. It was very tasty.

“Vish” will be rolled out soon, on the fish and chip nights. Apparently it’s seaweed deep-fried in batter.

Next big thing is Mary Lou arriving with all her new TDs on Thursday morning.

What with Sinn Féin being “newly enlarged” too, it’s going to be a very big entrance.