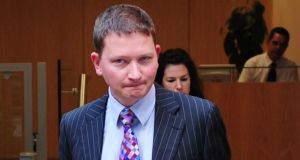 Michael Finucane told a subcommittee of the House of Representatives committee on foreign affairs that security force collusion in his father’s murder was the “last great historical issue” for the British government in the Northern Ireland conflict. Photograph: Aidan Crawley


The son of slain Belfast solicitor Pat Finucane has urged US congressmen to pressure the British government to honour its promise to hold a public inquiry into the 1989 murder.

Michael Finucane told a subcommittee of the House of Representatives committee on foreign affairs that security force collusion in the murder was the “last great historical issue” for the British government in the Northern Ireland conflict and the “most substantial one remaining unaddressed.”

If a public inquiry became a concern of Congress and the White House, it would be “the greatest moral force that you can bring to bear”, said Mr Finucane when asked what the committee could do.

There was an opportunity for President Obama to press British prime minister David Cameron on the issue at next month’s G8 summit in Northern Ireland, the subcommittee heard.

Members of Congress are drafting a letter to be sent to the British government demanding that an independent public inquiry be held to investigate collusion by Loyalists paramilitaries.

it colluded in the murder and apologised but had reserved “one final, yet massive injustice” by not holding a promised public inquiry.

“The deliberate decision not to proceed with a public inquiry is a glaring, public breach of faith,” said Mr Smith.

Mr Finucane said that information that came to light in the family’s litigation in Belfast showed that holding of a public inquiry was “hotly debated within the [British] civil service.”

Pat Finucane’s widow Geraldine is seeking access to material, including minutes of British cabinet meetings, after a report by lawyer Sir Desmond de Silva found that state agents were involved in the murder and that it should have been prevented.

Brigadier Gen James Cullen, a retired human rights attorney who investigated collusion in the murder, told the subcommittee hearing that a public inquiry would regain the confidence of the people of Northern Ireland, particularly disenfranchised elements of its society.