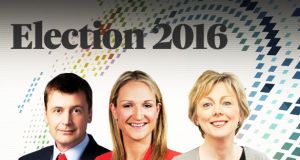 Fine Gael held its two seats in Meath East, while Fianna Fáil topped the poll and regained the seat it lost in the constituency in 2011.

Fianna Fáil senator Thomas Byrne was elected on the first count after his vote exceeded the quota and ensured his return to the Dáil after a five-year absence. “It’s a very positive day. I’m delighted,” Mr Byrne said as supporters cheered his arrival at the count centre in Ashbourne.

Mr Byrne was comfortably ahead of the other candidates with 26 per cent of the vote. Trailing him were the Fine Gael incumbents Helen McEntee, who received 18 per cent, and Regina Doherty on 16 per cent.

That gave the two Fine Gael candidates enough of a lead to stay ahead of their chief challenger, Sinn Féin Darren O’Rourke. He polled 14 per cent of first preference votes and remained in fourth place until Ms McEntee and Ms Doherty reached the quota on the ninth count.

Dominic Hannigan of the Labour Party, who topped the poll in 2011, was eliminated on the eighth count, having won just 5 per cent of first preferences. “Best wishes to the new Meath East TDs. Many thanks to those who voted for me and huge applause for those who worked so hard on my campaign,” Mr Hannigan tweeted on Saturday night, adding a smile-and-sunglasses emoji.

Outside the four largest parties, the strongest performer was Ashbourne-based Independent Joseph Bonner, who had 6 per cent and remained in the reckoning until the eighth count.

Fine Gael significantly outperformed its national showing, with its two candidates claiming a combined 35 per cent of the vote, compared to 26 per cent for Fine Gael nationally.

Meath is a regular target of boundary changes because of its status as a commuter belt area but this time around the status quo remained with no re-configuration from the 2012 constituency commission review.

Geographically a long constituency Meath East stretches from the tip of Cavan over to Louth and down to the border with Dublin.