To sustained applause and cheers from delegates at the party’s ardfheis in Derry, Sinn Féin deputy leader Mary Lou McDonald challenged Tánaiste Joan Burton to a debate, claiming the Labour leader had withdrawn her own call for a head-to-head. 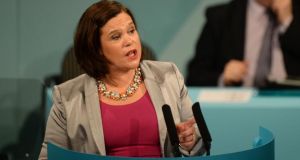 Sinn Féin deputy leader Mary Lou McDonald has challenged Tánaiste Joan Burton to a debate, claiming the Labour leader had withdrawn her own call for a head-to-head.

To sustained applause and cheers from delegates at the party’s ardfheis in Derry, she said: “I will debate anybody, anywhere, any time. Joan Burton challenged me to a debate, both Vincent Browne and RTÉ offered to facilitate the debate but Joan has changed her mind. Well Joan, you know where to find me.”

To laughter and applause, she said Minister for the Environment Alan Kelly “has vowed to rip us apart - we are quaking in our stilettos”.

In a rouing speech, she focused much of her attention on the Labour Party.

“Today, we pledge to the people that we will not make false promises to grab political power. We are not the Labour Party,” she said.

Setting out the party’s general election stall, she said Sinn Féin is “preparing for government, fit for government and ready to serve”.

Hitting out at the two parties in Government she said: “We will not be distracted by macho posturing or aggressive, negative noise from the Labour party, from their Fine Gael bedfellows or from anywhere else.

“We pledge today that we will not protect any privileged few at the expense of the many. We are not Fine Gael.”

She said Sinn Féin candidates had the talent and the tolerance “to seize the opportunity now to transform Ireland”.

The Dublin Central TD told delegates that those who believed they were “simply a party of protest don’t understand us and underestimate the people, who in increasing numbers give us their support”.

And those who criticised Sinn Féin as a party of idealistic rhetoric “miss our determination to achieve and to change our country for the better”.

Opponents “who sneer at us or discount our ambition for Ireland reveal only their own cynicism”.

She said public service was about defending the public good, standing up for citizens on the basis of equality and facing down those that have a vested interest in division and disadvantage.

“That is what Sinn Féin is all about. Let the debates commence, let the Republican alternative be scrutinised and understood by one and all.”