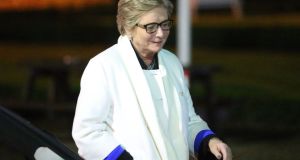 Officials in the Department of Justice could face disciplinary measures over any failure to pass on crucial documents to the Charleton tribunal, according to Government sources.

The prospect of disciplinary action was discussed by Taoiseach Leo Varadkar and Fianna Fáil leader Micheál Martin as they sought to stave off a general election, it is understood.

“There are Civil Service disciplinary procedures,” said a Government source.

An inquiry into why a number of emails at the Department of Justice regarding Garda whistleblower Sgt Maurice McCabe were not passed to the Charleton tribunal until recent days is to be completed before Christmas and an announcement regarding the nature of the inquiry is expected soon. The tribunal is investigating if there was a smear campaign against Sgt McCabe.

However, documents released by the department say the email that precipitated the resignation of tánaiste Frances Fitzgerald did not come within the scope of orders of discovery received from the tribunal.

A report submitted on Monday to then secretary general Noel Waters – who has since retired – said the department had “fully complied” with discovery orders.

It also said that the email that was more recently the focus of the department’s attention was given to the tribunal as part of its “voluntary disclosure on other matters”.

Attack strategy The report may indicate the position likely to be taken by the department when, as is expected, the tribunal hears public evidence about why the email was not produced to

it at an earlier date.

The email at the centre of the political crisis concerned the attack strategy being adopted by counsel for the then Garda commissioner, Nóirín O’Sullivan, at the O’Higgins commission in relation to Sgt McCabe in 2015.

Mr Varadkar and Mr Martin agreed a multi-point plan on Justice reform during their talks. Membership of an implementation group to oversee change in the department will be “agreed between the Taoiseach and the leader of Fianna Fáil in the context of the confidence-and-supply agreement”.

Fianna Fáil expects the agreement to be amended to reflect that plan.

At the meeting of the Fine Gael parliamentary party last night, Mr Varadkar said he wanted Ms Fitzgerald to return to the top level of politics in the future.

Ms Fitzgerald received a standing ovation at the meeting.

A new tánaiste will be announced today.