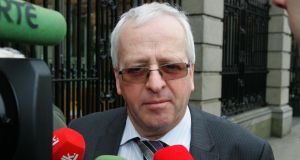 Independent TD Mattie McGrath believes the fatal foetal abnormalities bill championed by Labour’s Michael McNamara is an attempt to cause ‘mischief’ and an insincere cry for publicity. Photograph: David Sleator

The fatal foetal abnormalities Bill championed by Labour TD Michael McNamara is an attempt to cause “mischief”, Independent TD Mattie McGrath has said.

“We had deputy McNamara introducing the Bill last week, and I just think he did it for mischief,” he said.

“Mischief is probably the wrong word, but I think after the Labour conference knowing that there was another conference coming up this week in Derry, I think he just wanted to get in that Labour were the real party of the people.

“If he was really sincere about this he would have put it into the system and we could have come out and had a debate. What’s the point in mooting it and getting media attention for it and not submitting it for a chance to come out?” added Mr McGrath, who says the Oireachtas Committee on Health and Children will not be discussing the issue, contrary to his fellow TD’s assertions.

Mr McNamara described Mr McGrath’s comments as “spurious nonsense” and said the issue of fatal foetal abnormalities was on the work programme of the Committee of Heath and Children.

“I understand that hearings will be held before summer. Once those hearings are concluded this summer, I plan to submit my Bill for second stage hearing,” he said.

“Similar hearings, which proceeded the second stage of the Protection of Life Bill 2013 proved very useful in helping TDs and senators to understand the issues covered by the Bill, at least those TDs who wanted to understand.”

Mr McGrath was speaking at an event organised by the Every Life Counts group, who are advocating that the term “incompatible with life” be withdrawn from medical use globally in cases of unborn babies.

The Irish group will unite with counterparts from around the world on Wednesday to brief a UN conference on what they describe as “lethal discrimination” against pregnancies affected by foetal abnormalities.

Also present was Every Life Counts spokesperson Tracy Harkin, whose eight year-old daughter Kathleen Rose Harkin was born with Trisomy 13 – a rare medical disorder which drastically reduces the life expectancy of most infants diagnosed with the condition.

She says use of the term “incompatible with life” is “medically meaningless”, and makes both medical personnel and parents reluctant to carry out beneficial interventions after birth.

“There’s no comparison between talking to parents that have actually experienced the perinatal hospice model of care and the mothers who felt that abortion was their only option and they felt pushed towards that,” she said.

“I certainly get alarmed when I hear parents telling me that they have pushed for termination. They had no memory to hold onto, no photograph – they had to deliver a dead baby at 20 weeks, and that’s horrendous.”

Sarah Hynes, whose son Sean lived for two days following birth last August after being diagnosed with Edwards Syndrome – a chromosomal disorder which carries a high mortality rate for new born infants - said doctors and hospital staff pushed her into undergoing an examination which she believes caused her son’s life to be deprioritised after birth.

“Little did I know that once they had a diagnosis on paper, that my son’s life would be written off in an instant, with no hope or positivity about what the future may bring,” said Ms Hynes, who was critical of some of the care she experienced within the health system.

“It was horrendous for me to learn that my baby would not be helped medically in any way, shape or form after he was born– he would be left to die.”

Mr McNamara said the term “incompatible with life” is not used and neither Trisomy 13, nor Trisomy 18 - or Edwards Syndrome - are grounds for termination in what is “a very restrictive Bill that I believe complies with Article 40.3.3 of the Constitution as inserted by the Eight Amendment”.