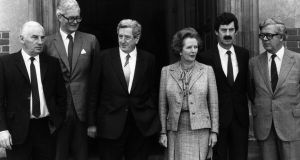 Peter Barry, Douglas Hurd, Garret Fitzgerald, Margaret Thatcher, Dick Spring and Geoffrey Howe prior to an Anglo-Irish summit in November 1984. The Maryfield secretariat operated until December 1998 to service the intergovernmental conference which was established under the 1985 Anglo-Irish Agreement. Photograph: Keystone/Getty Images

Declassified Northern Ireland Office (NIO) records from 1997 reveal a growing debate among diplomats on how to reduce unionist suspicions about the workings of the Maryfield secretariat at Holywood, Co Down, where both British and Irish officials were based.

The internal debate on how to “demystify Maryfield” or “debunk the bunker” in NIO speak, received a fillip in March 1997 with a proposal from the BBC journalist Stephen Grimason for a “fly on the wall” documentary about the secretariat.

Officials feared, however, that increasing transparency would only fuel conspiracy theories and might even reinforce unionist perceptions that “in addition to drawing up plans to unify Ireland” the NIO was “celebrating black Mass... and the like”.

A memo from Peter Bell, the British joint secretary, to JR Fisher of the NIO said Grimason had floated the idea of a documentary at the 1997 St Patrick’s Day party in the secretariat. “The proposed treatment would be, for example, moving around the secretariat (some pretty exciting footage here, one feels) and being present at the start of one of our delegation meetings... then panning away as we got down to business.”

Mulling over the idea, Bell felt that the proposal “might be a reel too far”, as did his Irish counterpart, David Donoghue. He added: “During the ceasefire [which broke down at Canary Wharf in February 1996] he – like me – would have been more sympathetic, but the combination of active hostility to the secretariat, plus the imponderable stresses and strains of the marching season, means that even the Irish side is reluctant to expose their staff to camera.

“It is also very difficult to imagine how even an edited version of an internal secretariat meeting would not give the impression, to those minded... that the Irish side was seeking to influence operational police decisions...”

The idea drew a humorous response from Andy Wood, the NIO director of information services. He expressed himself uneasy about the proposed television programme, particularly as filming would take place during the tense marching season.

Unionists will continue to believe that, in addition to drawing up plans to unify Ireland, you are also celebrating black Mass, slaving over your ouija boards and the like

“No prizes for supposing that events outside Maryfield might also serve to raise the temperature inside the building; this is not a comment on your Irish counterparts, simply to state that when things get hairy in the streets, the same effect can be detected in normally more tranquil locations...”

Indeed, Wood believed that such a documentary would merely reinforce unionist perceptions of the secretariat. “Of course, it is perfectly fair to argue that unionists will continue to believe that, in addition to drawing up plans to unify Ireland, you and your colleagues are also celebrating black Mass, slaving over your ouija boards and the like – and that the only way to disabuse them of this perception is to show them what really goes on. But there’s the rub – because [they] will continue to believe... that ‘you didn’t see the half of what really goes on in there!’”

In Wood’s view, the Grimason proposal might make “good television” but it would be, for the NIO, “bad politics”.

In a final note on the file, dated March 20th, 1997, the NIO’s deputy political director, Quentin Thomas, shared the reservations about the proposed documentary. He feared that “the more you expose, the more the conspiracy theorists [believe that] even worse is withheld”. The film was never made.