Opinion: Ireland has turned its back on the possibility of real change in favour of selling itself to anyone who will buy 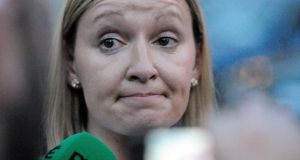 Lucinda Creighton: a great woman who in a healthy country would be embraced as a God-sent force. Photograph: Dave Meehan

Sometimes moments come and pass without giving any indication of themselves. Afterwards, it slowly dawns that what had seemed inevitable a short time ago is no longer so.

Just two months ago, I was writing enthusiastically about the possibility that Lucinda Creighton might soon step forward as a rallying figure “for the growing numbers of disenchanted citizens now struggling to breathe in this Republic of Fiscal Rectitude and Very Little Else”.

Tomorrow, supposedly, it all kicks off with a “monster meeting” in the RDS. But, somehow or another, in the short time between these two moments, the opportunity that shimmered briefly has all but certainly evaporated. In the interim, we’ve exited the bailout, quietly swallowed the doctored jobs and growth figures, and the papers talk up the housing market like it’s 2004 all over again. On the flimsiest of evidence, Ireland has slyly re-entered the anticipation zone. Sure, begob, this time next year we’ll be back on the pig’s back!

So I feel in my bones that tomorrow will be a damp squib, that what enthusiasm might briefly have bubbled for some radical political alternative has now waned.

In part, it has to do with the delusion of independence that we cling to in the face of all facts. We talk about reforming our political culture, reinvigorating our public realm, restoring democracy to our institutions, but it’s really an elaborate pantomime. In truth, if tomorrow morning everyone in Ireland stopped talking about politics altogether, and our politicians took to their beds for good, nothing fundamental would change for better or worse. Political reality would continue much as it has, to the beat of entirely different drums.

A performance
We’re a nation in hock, and not just economically. Everything we do or propose is mimicked from somewhere else. We pretend to be a modern democracy, but it’s really all a performance. We long ago waived the option of living by our own genius, in favour of prostitution. It’s as though, having inherited from our grandfather a shop with a flat overhead, we decided to rent out the shop and live upstairs off the rent and the munificence of occasional nocturnal visitors, rather than trouble ourselves with devising any ideas of our own. On the tidemark between the post-
imperial and post-colonial worlds, Ireland sells its ass as “the best small country in the world to do business in’”. The 12.5 per cent corporation tax
is our red light to the world.

It’s really a bit silly of us to be talking about “governance” and “democracy”. In truth, there’s hardly any governing left to be done – it all happens from outside. We live, as my late, great friend Billy Brown might have put it, off the “splash” of the global economy, dependent on the ebbs and flows of the tide. We subsist off the creativity and entrepreneurship of the wider world, a beachcomber’s wet dream of chemicals, computers and social networking chatter.

Self-flattery
It hardly matters a jot what we do, what we say, what we decide, whom we vote for. We become, by turns, apparently rich or indubitably poor, but either way it has little or nothing to do with ourselves. We insist on attaching credit or blame to the personnel we elect to “lead” us, but this is no more than self-flattery. It doesn’t matter whom we put in “power” – provided they don’t make any sudden moves, or cheek their doms and dommes in “Europe”. There is really but one significant policy with any relevance for our survival: the continuance of the 12.5 per cent – our way of converting nods and winks into euro
and cent.

There was a moment, three years ago, when something might have changed. The arse had fallen out of the whole thing. The tide had gone out and seemed to be staying out. The splash was delivering slim pickings. For a while, it seemed we might be forced to comprehend the true nature of our situation, transcend the pretences and face facts. But the moment passed, because a bunch of “writers and critics” who’d paid insufficient attention to their Dylan songbooks insisted on standing in the doorway and blocking up the hall.

For as long as the situation remained entirely hopeless, there remained an outside possibility that some man or woman might, in Pearse’s words, arise to do a splendid thing in virtue of which all might be forgiven. But, in the nature of our debased condition is the tragic circumstance that, as soon as there’s the slightest possibility of the splash reasserting itself, we lose our appetite for radicalism and adventure.

Lucinda Creighton is a great woman. In a healthy country, she would be embraced as a God-sent force to take us into the heart of the unfolding century. But, now, on second thoughts, I don’t believe it’s going to happen. The moment has passed without as much as a click in the night.