Locals to be asked to pay for road maintenance 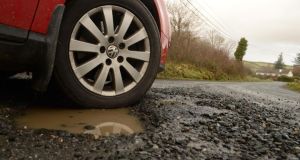 Local communities will be asked to consider contributing to the cost of road repairs. Photograph: Cyril Byrne

Local communities are to be asked to contribute up to half the cost of repairs to their roads, as part of a State-wide scheme being promoted by the Government.

Under a pilot programme announced by Minister for State Alan Kelly this morning ,the Government is providing €10.6 million which has been matched by almost €4 million of private money.

The announcement follows comments from Minister for Transport Leo Varadkar in March that no regional or local road improvements will take place for “the next couple of years”.

Speaking this morning, Mr Kelly said the new Government pilot scheme was extending nationally arrangements which were already in place in a number of local authorities. Under these arrangements businesses, local chambers of commerce and even individuals either contribute labour or finance to road maintenance.

“We have got to be realistic we do not have the same amount of funding as previous years”, Mr Kelly told RTE’s Morning Ireland .

Local authorities have already been told €42 million previously earmarked for road improvements could be switched to road maintenance this year.

Local communities are being asked to identify which road repair schemes they might consider assisting, either through the provision of direct labour or by financing the repairs. While figures of up to 50 per cent have been mentioned Mr Kelly said the usual contribution where such schemes have happened in the past was about 20 percent of the cost being provided by the community either in works or in cash.

After a series of long and wet winters with flooding and freezing conditions many of the State’s regional and local roads are in a very poor condition.

However local and regional roads continue to deteriorate and a video of Co Cork man apparently swimming in a huge pothole went viral on YouTube.

Mr Varadkar has previously said water “lying on roads“ is a large cause of deterioration, and an additional €2.7million is being allocated this year to drainage works in the worst-affected local and regional roads.

The Department of Transport allocates money from motor tax receipts to each local authority, at least one third of which is ring-fenced as the State grant for the upkeep and maintenance of local roads. Local authorities then add to the State grant from the remaining two-thirds of its road taxes allocation, or from other sources of funding such as parking charges, or subsidies from the Department of the Environment.

While local authorities also spent road tax money on parks, housing and sewerage some were not “putting enough into roads”, Mr Varadkar said.

However, Mr Varadkar does not have the power to force them to spend more on roads.

According to figures previously reported by The Irish Times , Cork County Council, which received €40 million as a State grant for 2013, put up just €8 million of its own resources, or 17 per cent of total funding for road works. The percentage contributed by the council towards its own local and regional road works have declined from 47 per cent in 1994, even through the years of the economic boom.

According to official figures, councils seemingly reluctant to contribute more of the road tax fund or other “own resources“ to the upkeep of their roads are: Donegal, whose contribution was just 16 per cent; Longford (15 per cent); Offaly (15 per cent); Roscommon (12 per cent) and Sligo (9 per cent).