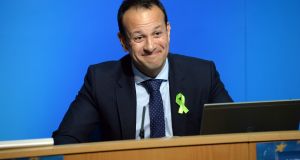 Minister for Social Protection Leo Varadkar: ends day one with support of 31 members of the parliamentary party to Simon Coveney’s 17, with 26 undecided or undeclared. Photograph: Dara Mac Dónaill

Despite their protestations that they had not been preparing for a leadership contest – out of respect for Enda Kenny, you understand – both Simon Coveney and Leo Varadkar seemed remarkably well-prepared for the first day of the Fine Gael leadership campaign on Thursday.

Groups of supporters for both men appeared for the camera, while a series of announcements from TDs and Ministers punctuated the day.

The reality, of course, is that electioneering within the party has been underway at least since the Taoiseach announced his intention to depart three months ago.

It is perceived within Fine Gael that Varadkar had been more assiduous in his preparation – possibly because he has been nurturing his leadership ambitions for longer – and he certainly had the better of the opening day.

Varadkar ends day one with the support of 32 members of the parliamentary party to Coveney’s 17, with 26 undecided or undeclared.

With the 73 TDs, Senators and MEPs making up almost two-thirds (65 per cent) of the electoral college, this is a commanding lead. Unless Coveney stems the lurch to Varadkar over the weekend, it may turn into a decisive one.

The danger for Coveney is that many of the undecided members of the parliamentary party are likely to be doing what politicians often do – waiting to see who is likely to win before they make their choice.

That is not to say the waverers will not decide to support Coveney.

Clearly some will. But if the trend of the first day continues, they will be making that decision in the expectation that it will damage their chances of promotion in a Varadkar-led administration.

They will be backing a man unlikely to win. That is not usually a choice that many politicians make.

There is, of course, a long way to go.

A rush to Varadkar was expected in the early stages. TDs will return to their constituencies for the weekend, where they will surely meet many of their councillors and members for whom Coveney has strong appeal.

But it is unquestionably first blood to Varadkar.

Twenty four hours in, he has the early momentum, the early lead. It is not an insurmountable obstacle for Coveney, but it is a significant one.

1 Coronavirus: HSE experts support the early reopening of schools
2 Quarantine may be lifted for arrivals into Ireland from countries with low Covid-19 cases
3 Irish planning for no-deal Brexit to restart as EU-UK talks go badly
4 The momentum behind calls to ease lockdown may become irresistible for politicians
5 All students will not return to school even if social distancing relaxed – McHugh
Real news has value SUBSCRIBE