Remedial work to be carried out on Georgian building, which forms core of the complex

Fiach Kelly reports from Leinster House where refurbishment works will be carried out over the summer months. The Seanad will have to sit elsewhere during the work. Video: Bryan O'Brien 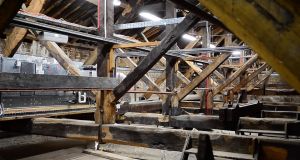 Leinster House is set to be covered in scaffolding for up to a year as the historic building undergoes its most significant restoration work to date.

Initial work will begin during the Dáil and Seanad summer recess, but the opening stages will focus on assessing the exact amount of work that has to be done.

The restoration was cited this week as a reason for a proposal put before the Fine Gael parliamentary party for the Dáil to rise on July 7th for the summer recess and return in late September.

There was criticism of this on Thursday from Opposition parties, who said a three-month recess would be far too long.

Ceann Comhairle Seán Ó Fearghaíl said the restorative works would not require the Dáil to rise so early. Tánaiste Frances Fitzgerald said the exact date will be discussed by the new Oireachtas business committee and then decided by the Dáil.

That is not expected to take place until next week, with sources suggesting the Dáil could instead rise on July 14th.

The level of restoration needed to Leinster House is such that work is expected to continue for about a year. A tender for the job has just been issued and the final cost is expected to be in the millions of euro.

A significant amount of preparatory assessment on what is needed has been done already, but the remainder will be finalised in the coming months. The restoration will be carried out on the old Georgian building, which forms the core of the Leinster House complex.

Access to the Dáil will remain but the Seanad is expected to be moved to a separate site, although another location has yet to be chosen.

The Dáil chamber will largely be unaffected because it is outside the Georgian core. Leinster House was built in the mid-18th century. But the current Dáil chamber was later added as a lecture theatre when the building was owned by the Royal Dublin Society.

Some work will be done on the Dáil chamber itself during the summer recess, however, such as an upgrade of the voting system to provide a button for deputies who want to abstain on votes. Currently, there is only a facility to cast a vote electronically either for or against a proposal. It is also planned that the sound system in the Dáil chamber will be upgraded.

The main purpose of the restoration work is to strengthen the structure, rewire the building and upgrade fire resistance capacity. Of particular concern are the rooves in various rooms, which have delicate and listed plasterwork and are in need or remedial work.

A spokesman for the Houses of the Oireachtas said the Office of Public Works is “taking this opportunity to reinstate the fabric of the building with a view to conserving the historical features of the House for future generations”.

“Georgian Leinster House is the original house, built in 1745, which has been added to over the years to meet the needs of its various occupants. The actual footprint of the original house includes the Seanad chamber and support areas, the Library reading room, the main lobby hall and corridor towards the Dáil stairwell, the Ceann Comhairle’s office, the (Seanad) Cathaoirleach’s Office, the General Office and the Enquiries Office.

“Over the last 270 years there have been many changes to the occupancy of the House. The wear and tear on the fabric of the House has become evident and initial conservation steps were taken to protect the ornate ceilings and other historic features.

“It is now time to address the underlying issues in order to meet the longer term conservation needs.”