Labour will only support government that backs its policies, says Howlin 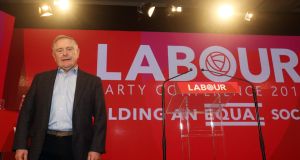 Labour will only go into government with other parties if its “non-negotiable” stance on five policy areas are adhered to, party leader Brendan Howlin has said.

Speaking to the media at the party’s national conference in Mullingar, Mr Howlin said the four byelections on November 29th would be “an opportunity for the people to give their own verdict on the performance of this Government”.

Asked about whether he would support Fine Gael or Fianna Fáil, Mr Howlin said personalities were a matter of “absolute indifference” to Labour.

The only thing that mattered was “what a government does and how it impacts on the people” and that was policy formation.

Mr Howlin, who believes Labour can at least double its seats from seven to 14, said that if they could convince people to elect enough Labour TDs to make a difference in the next Dáil they would set out their policy red lines that any party would have to endorse for their support.

But he added that his party had always said there was no difference between Fianna Fáil and Fine Gael and that the last three years of government had proved that.

The party’s red lines include the quality of work and the establishment of a living wage along with a housing policy to build 80,000 affordable homes over five years.

In city and county councils Labour has tended to form coalition alliances with Fianna Fáil, the Greens and Social Democrats.

The party has remained static in multiple opinion polls but gained 11 extra seats in the local elections and now has 57 councillors.

Four byelections will be held at the end of November to fill the seats vacated by TDs who took up places in the European Parliament.

Labour best prospects in the byelections are seen as Cllr Duncan Smith in Fingal and Cllr George Lawlor in Wexford, but Cllr John Maher in Cork North-Central “could be a surprise” according to some pundits.

Cllr Joanna Tuffy, a former TD, is the party’s candidate in Dublin Mid-West.

Speaking in advance of his leader’s speech to 600 party members at the conference, Mr Howlin said Fine Gael were “passive onlookers” on the crises in health and housing while Fianna Fáil was the “pretend Opposition” which kept Fine Gael in office.

Labour are giving a choice for “radical change”, he said.

When it was put to him that the left in Irish politics was expanding rather than uniting as he hoped for, he said people would have a chance at the general election to decide if they wanted a society similar to Sweden and Finland where “you really have equality and access to services as a matter of right”.

Labour would ask voters to back his party for number one votes and thereafter to support progressive parties and Independents and he hoped other parties would reciprocate.

He said because the party had been “seared” in government in the past it will only participate in or support an administration that backed the party’s red line issues.

He said it would deal with the “existential crisis” in climate change to lead a State-led massive investment in building a carbon-free economy and a childcare policy that would “give a fair chance to every child”.

Longford-Westmeath TD Willie Penrose said Labour is a party with a clear track record of public service and commitment to equality and could deliver.

He said it was time for the splintered left-wing in Ireland to unite.

Party chairman Jack O’Connor said Labour was the only political party in the State that had set out clear bottom line for its support for any new administration.

They would only support or participate in a government that pledged trade union representation to any worker who wanted it and supported its housing and health policies.