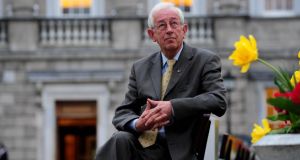 Emmet Stagg: The former Kildare North Labour deputy said entering a government arrangement would be disastrous for Labour and the idea should be opposed. Photograph: Aidan Crawley

There is large-scale opposition among Labour’s elected representatives to involvement in a Fine Gael-led minority government.

A clear majority of the councillors, TDs and former TDs contacted by The Irish Times oppose entering a coalition or, indeed, any arrangement where Labour offers support on a “confidence and supply” basis (support for budgets and no-confidence motions).

The Irish Times spoke to 27 Labour representatives drawn from across the State, including 20 of the party’s 50 councillors.

Only two said openly they would support the party entering an arrangement with Fine Gael. A further six said they were still undecided. A total of 19 expressed opposition, most in very strident terms.

Cllr Mick Duff from Dublin South West said he was firmly in the “out” camp and the party would be annihilated if it returned to government.

He said the party should have read the message it got in the last two elections where voters perceived it was out of touch with its working-class core and punished it severely.

“I am damned if I am going for further sacrifices in the local elections of 2019.

“If we go back in, most of our 50 councillors will be eliminated in the next election.”

Cllr Rebecca Moynihan of Dublin South Central said she opposed coalition and added it was much too late for the party to start talking now about “confidence and supply”.

Cllr Ken Farrell (Dublin Fingal) said Labour should not go back into the government and added that party leader Joan Burton should also be asked to resign forthwith.

“It was a clear election result. I have not heard of any person saying we should go into government,” he said.

The Kildare South councillor Mark Wall said the party had presented itself with Fine Gael in the election and the electorate had totally rejected both.

“We lost the election. Our time has to be in opposition where we can rebuild the party from there.”

Cllr Duncan Smith (Dublin Fingal) said he was “dead set against” going into government in any form.

“Young councillors got elected in 2014 against the odds. They should be given the chance of rebuilding the party and that’s best done from opposition,” he said.

Former Kildare North deputy Emmet Stagg said entering a government arrangement would be disastrous for Labour and the idea should be opposed.

Two councillors said they would favour a coalition arrangement. Cllr Andrew Montague (Dublin North West) said there were no safe options but questioned if the “confidence and supply” route would benefit the party.

“A lot of work we have done will come to fruition and we will begin to see real progress on other priority areas such as housing.”

Cllr Niall McNelis from Galway West expressed similar sentiments, saying many of the big Labour Party projects could be completed successfully during this term.

Among those who said they had not reached a decision were Cllr Brendan Carr (Dublin North West) and Cllr Fiona Bonfield (Tipperary).

Mr Carr said: “We could be irrelevant in opposition because of Fianna Fáil and Sinn Féin.

“On the other hand, if the party was wiped out by going back into government it would not be best for the country in the long term not to have a Labour Party.”

Kilkenny councillor Seán O hArgáin said he would oppose the arrangement unless the Social Democrats and Green Party were also involved, which was very unlikely. Like Cllr Moynihan he said this debate should have happened seven weeks ago.

Cllr Elena Secas (Limerick) said people voted against Labour being in government and she respected that view. Equally, Cllr John Pratt (Waterford) said it was time for others to step up to the mark.