Labour Party split on who will be leader 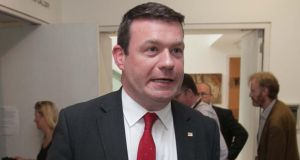 Alan Kelly is expected to signal his intent in relation to the Labour Party leadership on the Late Late Show tomorrow night. Photograph: Gareth Chaney/Collins

Labour Party members are split on who should next lead the party, but most appear to be backing either Seán Sherlock or Alan Kelly, rather than former minister for public expenditure Brendan Howlin.

Nominations for the position are to open next week, with Mr Kelly and Mr Howlin expected to contest for the role left vacant by Joan Burton.

Mr Howlin has indicated he is willing to contest for the position, while Mr Kelly is expected to signal his intent on the Late Late Show tomorrow night.

Most councillors from across the country contacted yesterday said they were in favour of a contest.

Cllr Mick Dollard from Longford-Westmeath said the “gods of the parliamentary party” should not be allowed make the decision alone. “The days of Pat Rabbitte, Ruairí Quinn and Brendan Howlin, for that matter, are gone. We need someone young to lead the party to a younger generation. I think Seán Sherlock would be a good person to lead the party. It shouldn’t be left to those who happen to be elected to the Dáil to decide. The grassroots should have their say.”

Cllr Kevin Byrne from Kildare North said he “wouldn’t mind Alan Kelly”, but his support is leaning towards Mr Sherlock. “He was a good junior minister and he is an unassuming, talented politician. I think Kelly needs to drop his quest for water. That is a dead duck.”

Cllr Joe Leddin from Limerick city said he is torn between Mr Kelly and Mr Sherlock. “Both are reasonably young, they have the energy and commitment for the role,” he said. “The troops need to be galvanised. I think a coronation would be a bad thing. Whoever wins the contest would then have the support and the validation of being elected by the members.”

The party’s national executive will meet this weekend to decide the process and then nominations will open and close.

Mr Howlin and Mr Kelly are due to hold discussions this weekend ahead of the process.

Neither will formally confirm until the nominations officially open, but both men have indicated they are willing to contest for the position.

If Mr Howlin decides not to run for the role, Mr Sherlock and former minister for Education Jan O’Sullivan will.

Cllr Noel Tuohy from Laois said Mr Kelly had his vote. “He is a good and honest man. He is effective, probably not a slick politician, but I respect that.”

Galway city’s Cllr Niall McNelis is also supporting Mr Kelly, who he described as a “strong and effective politician”.

He said the new leader has an unenviable task ahead of them to re-energise the party.

Party chairman Lorraine Mulligan, former Dublin Mid-West TD Joanna Tuffy and former senator Lorraine Higgins have been holding meetings across the country to assess the mood of the electorate.

The meetings, which are attended by members and supporters, address the difficulties facing the party and how it can repair.

Waterford’s Cllr John Pratt said the last thing the party needed was a divisive leadership contest. “We need to stay together and united. The party is broken and we need to rebuild.”