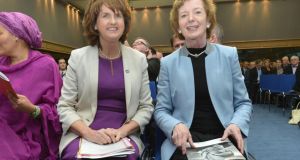 It was possibly the strangest St Valentine’s Day wooing in recent Irish political memory but the unexpected declaration of possible mutual attraction was to have a profound effect on the history of the State.

On February 14th 1990, Mary Robinson was at home when the telephone rang. It was John Rogers, a former attorney general, and a close friend of Dick Spring, who was then leader of the Labour Party. He had a request which he wanted to make to her in person.

Rogers travelled out to Robinson’s house and told her the Labour Party wanted her to consider being a candidate for the presidency.

To say Robinson was taken aback was an understatement: “I looked at him in absolute astonishment, my jaw dropped, my eyes widened, and I immediately said to myself, no way!” she recalled in her recent autobiography.

The invitation had come as a bolt out of the blue. Robinson had been a Labour politician but had left the party in 1985 because of her opposition to the Anglo Irish Agreement, which she felt had been imposed on the unionist majority without sufficient consultation.

Her relationship with Spring and the party had cooled and, to all intents and purposes, she had left politics behind for a career in law, specifically in the area of human rights.

But initial reluctance on her part gave way to acceptance. As Bride Rosney, a close friend and later personal adviser during her presidency recalls, that St Valentine’s Day approach her thinking changed over the course of that weekend.

“At the beginning my reaction was surprise”, recalls Rosney. “That gave way to a sense of determination. [We felt] that she could only do it if she stayed outside the Labour Party. The reality was that a Labour candidate would never get over the line.”

How did Labour arrive at choosing Robinson when she had left the party and the break had seemed complete? After Patrick Hillery’s 14 years in office, Spring was determined there would be a contest.

As his then adviser Fergus Finlay explains: “Spring did an an interview on January 5th, 1990 with This Week (on RTE Radio). He announced to everybody’s consternation, including his advisers, that he wanted a contested presidency. If it was necessary he would contest it himself.”

Labour worked on the idea of a changed role, of a “working presidency” but had difficulty finding a suitable candidate. It was Ruairi Quinn’s secretary Denise Rogers who suggested Robinson, as somebody dramatically different.

Over the course of the weekend Robinson had become increasingly excited at the prospect and was working on the idea of a president with little power but huge potential to expand the role of the presidency, act as an influence and moral force in defining a more modern Ireland.

By the time she met with Spring and his key advisers early the next week, Finlay (who was there that night) was convinced the die had been cast: “Within minutes I was certain that she wanted to run. Furthermore she had already figured out why she wanted to run and what kind of president she wanted to be.

“She had already internalised how she could be a different kind of President.”

Her campaign was different. Traditionally, they lasted six weeks but her’s lasted six months. It was always known that Brian Lenihan would be the Fianna Fáil candidate. He had done a Late Late Special, full of tributes to him, which seemed to pave a way for a coronation.

At the start there was not too much optimism. “At the start I felt a victory would be having the points she raised taken on board by the person who won, which we assumed would be Lenihan,” recalls Rosney.

Robinson’s insistence on being independent was eventually accepted by Labour. Some of the most influential supporters were the then independent TD Jim Kemmy, the Workers Party, and Eoghan Harris, who convinced her she needed to expand her appeal beyond a plummy lawyerly Dublin 4 constituency.

It was a challenge.

Says Rosney: “Mary Robinson was and is a shy person. She adopted a position in the presidential elections, with her clothes and image, she treated it like an interview and the interview panel was the entire people of Ireland.”

While Lenihan was the front runner, Finlay was confident enough to place a £100 bet with Paddy Power at odds of 10/1.

Says Finlay: “Bride Rosney would say to you that Labour thought she never had a chance. We argued that she had a rattling chance of coming second on first preference votes. Lenihan was unbeatable on the first count but whoever came second would win.”

Robinson did two entire tours of the country. Rosney recalls that when booking at the start people said “Mary who?” but that changed. Robinson loved the campaign, said Rosney, described it as a journey of discovery for herself.

“The comments she got and it’s probably a strong Irishism. People said: ‘We want a president who will do us proud.’”

The Fine Gael candidate Austin Currie never gained traction and whatever advantage Lenihan may have had was lost when he got badly compromised when denying he made a call to President Hillery during a Constitutional crisis (he had previously told a research student that he had done so).

And the influence of that Valentine’s Day call? Profound and epoch changing, say Rosney and Finlay.

“Within a couple of years we had decriminalised homosexualityand legalised divorce. It’s perfectly legitimate to talk about a Robinson era in which things began: her handshake with Gerry Adams; her tea with the Queen.”

It was a quarter of century ago today – it was one of those moments after which things would never be the same.