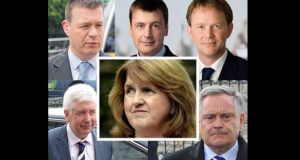 Joan Burton: The Dublin West TD is the early favourite, and was quick out of the traps on Monday, canvassing backbenchers for support almost immediately after Eamon Gilmore announced his resignation.

Ms Burton has worked the grassroots assiduously in the past three years. She is also the most popular Minister among members of the public.

She would not have much support in the parliamentary party, although Carlow-Kilkenny’s Ann Phelan and Dublin Mid-West TD Joanna Tuffy would be expected to back her. Her main strength is among the rank-and-file members.

Ms Burton has consistently said Labour should be the party of work, rather than a party of welfare. She will also emphasise the need for Labour to refocus on its strengths in the public sector and with the working class.

Her supporters will also point to her appeal to the average voter. TDs could be persuaded she will be the most acceptable face to have on posters come the election.

Arthur Spring: The likelihood of the Kerry deputy, a nephew of former tánaiste Dick Spring, becoming leader is slim. If he contests, the former banker and juice bar owner would be hoping to appeal to a younger demographic among party members.

Some colleagues contend Mr Spring has not “earned his stripes” and contrast the first-time TD’s low profile with that of better known and more experienced potential contenders.

He has emphasised the challenges facing couples with young families in what he describes as his “jinxed” generation, who bought homes between 2004 and 2008 and now struggle with negative equity. Mr Spring is a social democrat and an admirer of the Nordic model of society, having spent time in Sweden in his 20s.

He believes the party’s communications strategy should be improved and more emphasis should be put on defining exactly what segments of society the Labour Party is trying to engage.

Alex White: The 55-year-old barrister and former producer of The Gay Byrne Show has impressed a cohort of colleagues, who would like to see a media-savvy performer as party leader.

The Dublin South deputy is undoubtedly persuasive and highly intelligent, but doubts remain as to whether he could encourage enough ordinary members of the party to back him in a contest with longer-serving competitors.

Perceived as a liberal-leaning lawyer, some colleagues outside the capital suggest he might struggle to extend his appeal beyond a Dublin-centric, middle class niche.

His expertise as a legislator came to the fore during the fraught abortion debate. A first-time TD who had served a term as a senator, Mr White’s accomplishments were recognised when he was promoted to Minister of State for Primary Care in 2012 following Róisín Shortall’s departure.

Brendan Howlin: The Minister for Public Expenditure would command wide support in the parliamentary party, and many TDs have paid tribute to his ability to handle budget negotiations. It could boil down to a straight fight between him and Joan Burton.

While Labour parliamentary party members are keeping their cards close to their chests, there is a feeling that some of the influential older TDs, such as Willie Penrose and Emmet Stagg, could row in behind Mr Howlin, possibly bringing their strong membership bases in areas like Westmeath and Kildare with them.

The Wexford TD could pitch himself as a safe pair of hands to steer Labour in Government through the difficult budget expected towards the end of this year. Deputies and party members anxious to avoid an early general election could opt for Mr Howlin. He could draw on the strength of rural TDs who would like to see a leader come from outside the capital, following the leaderships of Ruairí­ Quinn, Pat Rabbitte and Eamon Gilmore.

Alan Kelly: The Minister of State at the Department of Transport would not be considered a front-runner but it would be unwise to completely rule him out of contention. His focus may be on securing the position of deputy leader and the expected full Cabinet post that would probably come with it.

If Joan Burton were to become leader, Alan Kelly could position himself as a male, young and rural counterbalance to her. He could gather support from a combination of those arguing for a generational change and those pushing for a rural presence at the top of the party. Kelly is based in Nenagh, Co Tipperary, but would not command wide backing in the parliamentary party. Expect Mr Kelly to emphasise his youth to play on those who want to see the rainbow coalition generation pass the baton, as well as a desire for renewal and regeneration of Labour.

His backers hope he would get support in the rural strongholds of Willie Penrose, Jack Wall and Emmet Stagg but he won’t be alone in hoping for support from those quarters.

He is considering a tilt at the leadership but would not be considered as a frontrunner. The inclusion of Mr Hannigan’s name on the motion of no confidence in Eamon Gilmore surprised many, since he was previously seen as an ultra-loyalist.

However, he was director of elections for the disastrous by-election in his constituency last year, which saw Eoin Holmes, the party candidate, finish last year.

A number of the so-called gang of eight who signed the no confidence motion have cited the by-election as when doubts started to surface about Mr Gilmore’s leadership.

Given that Hannigan, along with Clare TD Michael McNamara, is advocating an entire clear out of the current Labour members of Cabinet, he is clearly pitching himself at the younger members of the party.