Kenny rules out income tax hikes in next budget 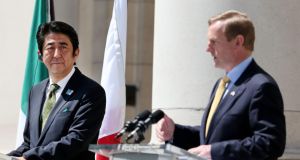 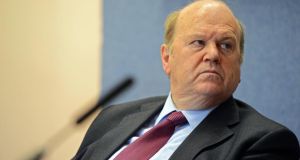 Mr Kenny declined to comment on possible income tax cuts, saying Cabinet had not yet discussed Budget 2014. However, he said there would be “no income tax increases”.

“The budget insofar as Ireland is concerned hasn’t been discussed by Cabinet yet,” Mr Kenny said in Dublin at a joint press conference with Japanese prime minister Shinzo Abe. “The two Ministers for Finance and the Minister for Public Expenditure and Reform will bring a joint memo to Government on the strategy in regard to the budget which will be held on October 15th. I don’t expect that the detail of the budget will be entered into at this stage.

“Let me say that it’s part of our programme for Government that there would not be any increase in income tax. We believe this is fundamental in the context of the creation of jobs and not to put obstacles in the way of jobs being created. “We have set out a strategy to create 100,000 new jobs net in the time ahead and that’s why that’s in our programme for Government.”

Speaking to journalists at a conference on taxation and the economy at the Royal College of Physicians, Mr Noonan said avoiding higher income taxes was important for competitiveness.

Mr Noonan said his department was today circulating the first document setting out the parameters for next year’s budget. He said this would be the first step in discussions with his Cabinet colleagues about the shape of Budget 2014.

While Labour sources have been emphasising the need to scale back on spending cuts in the next budget, Fine Gael Ministers have been ruling out any further income tax increases and stressing the need for tax cuts as soon as possible to ensure the economic recovery continues.

Asked where he stood on implementing tax cuts versus scaling back spending cuts, Minister for the Environment Phil Hogan said this morning: “I’ll tell you, I’m going to leave that now for a matter for a Budget discussion. In the context of our estimates I have a lot of places where I can spend a lot more money like other Ministers.”

In a speech today, Minister for Enterprise and Jobs Richard Bruton said tax cuts are necessary to sustain economic recovery.

Mr Bruton’s remarks represent a shot across the bows of Labour Ministers who have been calling for a scaling back of spending cuts in line with the country’s improving finances.

Some Labour TDs have called for higher taxes on those earning more than €100,000.

As the Cabinet met in Dublin for the first substantive discussion on budget options Mr Bruton told an international audience that ordinary Irish families who have taken so much pain in recent years need to see a reduction in their tax burden.

In a speech delivered to the International Labour Organisation in Geneva, as part of his duties under the Irish EU presidency, the Minister said Ireland must address the burden of income tax on people with average incomes to create the jobs required to tackle the unemployment crisis.

“For example, a recent report from the Irish Government’s advisory body on industry and competitiveness has shown that the marginal rate of income tax at 52 per cent for employees and 55 per cent for self-employed is higher than in most of our competitor countries,” said Mr Bruton.

“It also kicks in at a much lower level of income. In fact at €32,800 for a single person, the threshold is below the average Irish income,” he added.

The Minister said tax rates of more than 50 per cent on average incomes did damage to inward investment and entrepreneurship and made too many people question whether they would be better off not working.

1 Luke ‘Ming’ Flanagan bares his bottom half to European Parliament
2 A third of arrivals in Ireland are not answering phone for self-isolation checks
3 Easing restrictions: What exactly will happen next Monday?
4 More than 200 people contracted Covid-19 while in hospital for other conditions
5 George Floyd: Protesters defy curfew as demonstrations over killing rage on
Real news has value SUBSCRIBE