Kenny ‘not in position’ to dictate to US on immigration reform 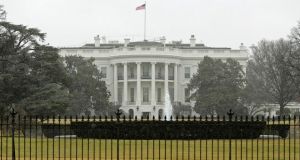 Taoiseach Enda Kenny has said he will raise the issue of the undocumented Irish when he meets US president Barack Obama at the White House on St Patrick’s Day but will not adopt an “aggressive stance” with the American administration. Photograph:Gary Cameron/Reuters files.

Taoiseach Enda Kenny has said he will raise the issue of the undocumented Irish with US president Barack Obama but will not adopt an “aggressive stance” with the American administration.

New York-based publisher Niall O’Dowd recently called for pressure to be put on the US Government, adding that it did not respond to politicians “being nice”.

However, Mr Kenny said his Government would negotiate but was not in a position to dictate to the American administration on the issue of immigration reform.

“I don’t agree that arriving up on Capital Buildings and being very aggressive is going to yield any more beneficial results,” Mr Kenny said on Monday.

“And I understand that Niall O’Dowd has a long experience of dealing with this, but politicians have to negotiate with each other.”

Mr Kenny said the most important thing for undocumented Irish was to ensure they could travel to Ireland and back to the US while a “path to legitimacy or legalisation” was being formulated.

Pointing to the balance of power in the US, Mr Kenny said: “There’s a new administration obviously here in the States now with the Republicans in charge in the Senate and in the House, as it were.”

He said it was a matter for the American administration to decide what it wanted to do. Mr Obama’s executive action on immigration announced last November had been strongly supported by the Government.

“So the administration now needs to sit down and decide how best it sees that it should do this and that’s why we negotiate with them from our perspective as to what we want.”

Mr Kenny expressed sympathy with the plight of undocumented Irish in the US.

“The reason that they’re undocumented is that many of them might have overstayed their welcome on ordinary visas or whatever, but it’s the human consequences of that that interest me,” he said.

“And you know the stories of people who have died at home and those who are here can’t go back.”

Mr Kenny said those stories would form part of the case the Government would make to the US administration in the hope that a process to help so-called illegals could be secured.

“I don’t agree that having a more aggressive stance would bring results any faster. We’re not in a position to dictate to the American administration what to do here,” he said,

“We are in a position to negotiate with them in respect of the 50,000 that we know are undocumented here in the States from Ireland.”

Mr Kenny praised the new US Ambassador to Ireland Kevin O’Malley who said had a good understanding of the issues involved.

“The really important thing from an Irish point of view is that once a process is put in place that our people would have the opportunity to be able to travel over and back while that path to legitimacy or legalisation is actually achieved.

“That’s the really important issue for us.”