Kelly not ruling out referendum on Irish Water 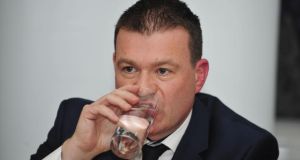 Minister for the Environment Alan Kelly: said that Irish Water was necessary as an infrastructural utility. Photograph: Aidan Crawley

Minister for the Environment Alan Kelly has said he would not rule out holding a referendum to ensure Irish Water stays in public ownership.

He was speaking in the Seanad after Labour Senators voted with the Opposition and against their Coalition partners Fine Gael on holding a referendum. Following heated exchanges, the Government lost the vote by 37-16.

Mr Kelly said he appreciated what the House had decided. “I will bring it to Government, the Taoiseach and the Tánaiste in particular,” he added. “I am not going to rule out that is necessarily the road we should go.”

He said that the issue was something that had to be digested and a decision could not be made quickly.

The Minister’s remarks differed from what Taoiseach Enda Kenny said in the Dáil on Tuesday when he firmly ruled out a referendum. “It is not proposed to hold a referendum in respect of a right to water being enshrined in the Constitution,” he added. He said any party favouring privatisation could put it in its election manifesto.

He said the alternative was direct funding through the exchequer, with €600 million to €1 billion required annually.

The motion calling for a referendum, which was moved by Fianna Fáil Senator Darragh O’Brien, read: “That Seanad Éireann requests the Government to initiate legislation to provide for a constitutional referendum to enshrine the ownership of Irish Water to the Irish people in perpetuity.”

Mr O’Brien said that one of the major issues regarding the management of water charging had been the manner in which Irish Water was set up as a subsidiary of Bord Gáis Éireann. Effectively the sole shareholder in that was the Minister for the Environment and the equivalent minister in any future government. There was nothing to prevent the Minister or his successor from privatising the company, he added.

Denis O’Donovan (FF) said that while it may already be law that Irish Water could not be sold, it was not sufficient merely to have a legislative provision.

Colm Burke (FG) said he would have no difficulty with holding a referendum. A 20-year contract was given because there was an investment in infrastructure. “To ensure a refund on that investment, it was necessary to have such a contract,” he added.

“There is no reason that this type of system could not continue even if a referendum was held to ensure that Irish Water’s infrastructure was not sold.”

Members of the Opposition were critical of the time allocated to the debate, leading to strong exchanges with Cathaoirleach Paddy Burke.

Brian Ó Domhnaill (FF) accused Government Senators of not wanting a debate. “You do not want a debate,”he said, “that is why you shout us down.”