Tánaiste tells constituents choice will be between her, Ruth Coppinger and Sinn Féin 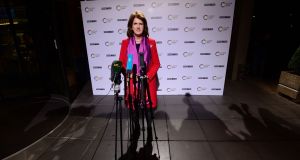 Tánaiste Joan Burton has told voters she is in contention for the last seat in the Dublin West constituency.

In a letter to constituents the leader of the Labour Party said the contest will go to the wire and will be between her, Anti-Austerity Alliance TD Ruth Coppinger and Sinn Féin candidate Paul Donnelly.

Ms Burton said: “So on Friday the choice will be between myself and either Ruth Coppinger or Sinn Féin. It is quite a stark choice.

“Do you want to swap me for one of these candidates?”

A recent opinion poll showed Ms Burton is at risk of losing her seat in the five-seat constituency.

In the letter Ms Burton said the country has come a long way in the past five years.

She said that was not an accident but as a result of good political leadership and careful financial management.

She added: “All that could be put at risk if you don’t act with your vote on Friday.

“You can beat the opinion polls by giving me your number one vote.”

The letter follows a recommendation by Minister for Health Leo Varadkar to transfer to Ms Burton after their two Fine Gael candidates.

Mr Varadkar is expected to top the poll and Fine Gael and Labour Party strategists are eager that his transfers help the Tánaiste get over the line.

Minister for Jobs, Enterprise and Innovation Richard Bruton has confirmed he has been asked by Fine Gael to vote number one for his running mate Naoise Ó Muirí. He said he would be following the direction from the party.