Irishman to be named as EU ambassador to Washington 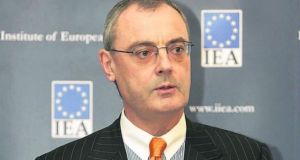 The appointment of Irishman David O’Sullivan as EU ambassador to the United States will be announced early next week, the Irish Times understands.

David O’Sullivan, a senior official with the European Union, will be named by EU high representative for foreign affairs Catherine Ashton as the new EU ambassador to Washington as early as Tuesday.

The appointment of an Irish candidate to the position will be seen as a coup for Ireland, less than five years after former Taoiseach John Bruton completed his term as the EU’s ambassador to Washington.

Mr O’Sullivan’s experience in EU foreign affairs and trade will be perceived as key attributes as he takes up his role. Ongoing negotiations between the EU and the US on a trade agreement are likely to dominate transatlantic relations in the coming years, while the crisis in Ukraine has pushed the question of EU-US co-operation, and particularly the role of NATO, into the spotlight.