Irish Water to appear before committee over spending 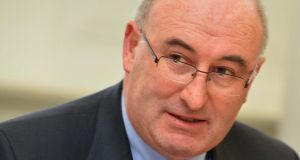 Minister for the Environment Phil Hogan has said the €50 million spent by Irish Water on consultants is a lot of money, but insisted it was needed to establish the company. Photograph: David Sleator/The Irish Times

Senior management of Irish Water is to appear before a special meeting of the Oireachtas environment committee on Tuesday to address public concerns over spending levels, it was confirmed this evening

Earlier today Minister for the Environment Phil Hogan aid the €50 million spent by Irish Water on consultants is a lot of money, but insisted it was needed to establish the company.

Mr Hogan also said all external contracts were open to competition and said getting the establishment of Irish Water right will save money in the long term.

Chairman of the Public Accounts Committee John McGuinness TD said Irish Water cannot be audited by the Comptroller and Auditor General or be compelled to appear before the PAC.

This will “only add to the puvlic anger” and “also demonstrates the unsuitability of the structure of Irish Water as established by this Government,” he said.

The utility firm was due before the Environment committee in early February. “given the level of public concern over the last number of days, I feel it only appropriate that senior management come before a special sitting,” committee chairman Michael McCarthy said.

“The public has a right to know exactly how this money was spent and how it can be justified. Public confidence in Irish Water needs to be strong and transparency is a key component of that. I look forward to a frank and open discussion with representatives of the organisation,” he said.

However, Tánaiste Eamon Gilmore insisted Irish Water had to show the money was well spent.

Minister Hogan told the Sue Nunn Show on KCLR radio this morning: “Well €50 million is a lot of money but €50 million is part of the money that is required to set up this company that will bring €2 billion in savings to the taxpayer over the next seven years” .

“These particular costs have been openly tendered for and they have been verified by the regulator ”.

He also said “you have to have start-up cost”. “It certainly is going to cost money to set up a company from scratch.”

“This is going to be a very cost effective and lean operation,” he said.

Mr Hogan also said contracts were not “part of a cosy arrangement, they are tendered for.”

But Fianna Fáil said Irish Water is a “runaway train” with spiralling costs which will lead to higher water bills for consumers.

There were also calls from Independent TD Shane Ross and Fine Gael deputy Simon Harris for Irish Water to appear before the Public Accounts Committee (PAC).

Fianna Fáil environment spokesman Barry Cowen also said the semi-state and Government had not provided enough information about its establishment.

“Irish Water was invented by Fine Gael in opposition, it has been implemented and set up and put in place in Government, aided and abetted by the Labour Party.”

He said it is “deliberately clouded in secrecy by Government” and Fianna Fail has tabled Dáil motion for next week calling for Irish Water to be brought under the FOI act.

He said the message from the Government to “the Irish people was don’t worry about it, relax take it easy. It’ll be alright on the night but that’s not what I was elected to do. That’s not what this party is in opposition for. This Government has refused to account itself to the people in this area”.

Mr Cowen also said there must be transparency in how contracts are awarded and people are appointed to jobs in Irish Water.