Analysis: All ‘on track’ for Irish Water, say Arnett and Kelly, despite the icebergs 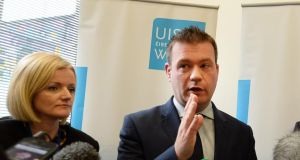 Elizabeth Arnett of Irish Water and Minister for the Environment Alan Kelly insisted Irish Water was on target, even though both studiously refused to say what those targets are. Photograph: Cyril Byrne

If were to believe the polished Elizabeth Arnett of Irish Water or the more truculent Minister for the Environment Alan Kelly on radio this morning, the compliance rate for paying the first Irish Water bills was a great success.

In a series of interviews on Wednesday, they said it was “on track”, adhered to expectations, and also was on target, even though both studiously refused to say what those targets are.

It was like saying the maiden voyage of the Titanic was a great success, give or take an iceberg or two.

No matter how the Government and Irish Water will try stop sell it, the figures are mediocre, at best.

The new State-owned water utility company has taken in €30.5 million in the first quarterly billing period. Extrapolated over a year that is €122 in revenue, a long way short of its own projections of €166 million.

By any yardstick it is low, below the psychologically important level of 50 per cent. If that level had been achieved, it would have allowed the utility to say a majority of households were compliant.

So in political terms, it represents a round win for those campaigning against the charges, rather than its supporters.

The percentage of compliant customers was never going to be high, say above 70 per cent, which could be explained by a number factors.

It was a new charge and there will always be a certain proportion of new customers who will drag their heels.

There has been a very effective and sustained campaign backed by all opposition parties against it. Among those who have refused to pay are those who are ideologically opposed. And then there are floaters, those who have delayed making a payment until they know which way the wind is blowing.

That decision to wait and see is undoubtedly influenced by the fact that sanctions for failing to bay pills are not draconian.

For example, households will not see their water supply cut off if they don’t pay their bills. And until recent weeks, the powers given to the utility to chase defaulters and those in continuous arrears seemed to be on the weak side (tougher new legislation on debt management being steered through the Oireachtas by Minister for Justice Frances Fitzgerald will change that).

Still, it is known that there is a grace period of a year (failure to pay four successive periods) before the shutters start coming down.

So on the scale of things, the perception among the public of the charge is close to that of the TV licence, where evasion rates remain at a high 17 or 18 per cent each year. It can no longer be compared to the property tax.

Once Revenue, with all its fearsome reputation, became involved in this tax, the compliance rates shot up. It is now 96 per cent, as close to full compliance as can be achieved.

Water utility companies – both private and State-owned – have been a reality in the UK for some time now. It must be noted that the charges there are much higher than here - well over €700 per annum per household for the most expensive, South West Water, that provides water and sewerage services.

Like Irish Water, the utilities are not allowed cut water supplies for non-payment and use debt-collection services to collect arrears. In some areas, where water charges are collected along with council taxes, there are powers to deduct arrears from welfare payments and wages. In all a total of €1.4 billion was owed in the UK in arrears in 2010.

Notwithstanding higher water charges, the compliance rates are dramatically higher in Britain. Sure, the companies are well established and you always have to allow for a bedding-in period, especially with an unpopular new charge where the onus of responsibility for payment rests on the customer.

A small sidebar. Those who rail against water charges have ignored the fact in their arguments that 100,000 households in group water schemes have been paying an average of €150 per annum in water charges for decades. Most of these customers have meters. Most have done so uncomplainingly. There has been little expression of equity for that cohort.

Politically, it’s a setback for the Government and for Kelly. Having spent months successfully keeping Irish Water off the agenda, it is now right back there in the centre of things.

If there is not a substantial increase in the number of households paying by the end of the year, it will have an electoral impact on the Coalition.