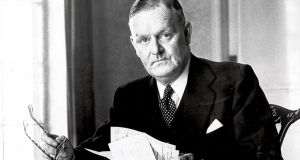 Frederick Boland, the secretary of the department of external affairs in 1948: “Even strongly anti-communist Italians might take exception to intervention of a foreign government in Italian affairs, however, helpfully intended.”

The equivalent of more than €2 million in today’s money was secretly channelled through the Irish embassy to the Vatican in an effort to influence the outcome of the Italian general election in 1948, according to documents in the archives of the department of external affairs to be published next week.

The £25,627 raised from voluntary donations and State funds from the secret service account was passed through the embassy to Catholic political activists campaigning for the Italian Christian Democratic Party. The intervention was authorised by then minister for external affairs Seán MacBride, who feared the Italian Communist Party might win the election in April 1948.

Officials in Dublin were worried that if news of the secret payments leaked out, relations between Ireland and Italy could be damaged. “Naturally there should be no reference to department or embassy as channel transmission,” the secretary of the department Frederick Boland told Irish ambassador to the Holy See, Joe Walshe, in a coded telegram.

“Even strongly anti-communist Italians might take exception to intervention of a foreign government in Italian affairs, however, helpfully intended. Sure, you will not expose yourself to personal attack from this point of view.”

In a series of confidential memos that spring, Walshe strongly encouraged department officials to facilitate the transfer of funds to a group called Catholic Action headed by Prof Luigi Gedda.

“If (as the minister will no doubt agree) the fight in Italy is one for the future of Christian civilisation . . . fought around the very person of Christ’s representative on earth . . . have we in Ireland an urgent duty in relation to it. I suggest with the greatest possible deference that we have,” Walshe told Boland.

“If we could send a substantial sum of money for propaganda purposes out of SS [secret service], it could be kept a complete secret. Even a few thousands would be very gratefully received at the point where we appreciate gratitude most. If civil war comes, and if it does the church will be the first victim, I have no doubt that volunteers from Ireland, well equipped, would be most warmly welcomed. They will only be one of many contingents,” wrote Walshe.

MacBride, in a letter to the archbishop of Armagh John Dalton, acknowledged the receipt of money which was passed on to Rome. “I had long talks with our ambassador recently and know how pleased he will be to learn of Your Grace’s gift and to the publicity Your Grace gave to Professor Gedda’s appeal. He feels that with some financial assistance Professor Gedda’s organisation will be able to effectively combat much of the communist propaganda. I respectfully agree with Your Grace that it is a pity that this appeal was not launched several months ago.

“Perhaps the danger of the situation was not fully appreciated until the last few weeks. I have been in close touch with His Grace the Archbishop of Dublin, who has been able, through his close contacts here in Dublin, to raise speedily a substantial sum which will be of valuable help,” wrote MacBride.

In the event the Christian Democrats won the election comfortably and the Communist Party never achieved power in Italy.