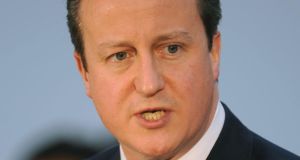 David Cameron: seen as making a strong case for Britain staying in the EU

The Government must be “very careful to avoid expressing views” on the question of Scottish independence, according to internal Department of Foreign Affairs briefing material.

The documents indicate the approach of diplomats and Ministers is to maintain a close watching brief on the debate and steer away from comments which could be seen to favour either side.

“The question of membership of the EU for an independent Scotland is a hypothetical one at the present time,” it states.

“Discussion of it raises complex issues of considerable sensitivity and so the Government must be careful to avoid expressing views prematurely.”

Briefing documents, prepared for the secretary generation of the Department of Foreign Affairs earlier this year, state that officials are following the debate very closely.

Among the implications being examined, it notes, are the potential for a referendum in this State to recognise any new arrangements.

“. . . The final text of any amending treaty would be referred to the Attorney General for advice as to whether an amendment of the Constitution (and thus a referendum) would be required to enable its ratification,” it states.

British prime minister David Cameron has pledged that if a Conservative government is elected in 2015, it will seek to negotiate a new settlement with EU partners.

A referendum on this settlement would be due to be put to the British electorate before the end of 2017.

Membership of the EU

“The Irish position has been that the UK is better off within the EU, and that the union is stronger by having the UK within it,” it states.

The consequences of a UK detachment from Europe would be “bad for Northern Ireland which has benefitted immeasurably from the EU – economically, financially, socially and indeed politically,” documents state.

Joint membership of the EU has been fundamental to North/South cross-Border cooperation, according to the briefing material.

A document states: “The EU aspect informs much of our work in areas such as agriculture, trade, the environment and indeed right across the areas of North/South co-operation.”

Other material indicates alarm within Government over the extent of alleged electronic surveillance by the US.

It emerged in recent months that the phones of political leaders such as German chancellor Angela Merkel have been bugged by the US .

Documents show the Government’s concerns over alleged surveillance were conveyed in contact with the US embassy in Dublin.

“We do not have any information that would indicate that surveillance took place here in Ireland,” a document states.

“It has been made clear to the US embassy, however, that any such surveillances here would be unacceptable to us.”