Irish in UK could lose right to work after Brexit, says report 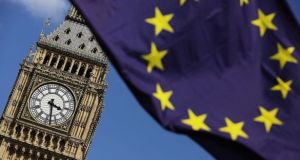 Irish citizens living in Britain could be at risk of losing their right to live, work, rent private accommodation and avail of healthcare services in a post-Brexit UK, a new report warns. Photograph: Daniel Leal-Olivas/PA

Irish citizens living in Britain could be at risk of losing their right to live, work, rent private accommodation and avail of healthcare services in a post-Brexit UK, a new report into citizens’ rights has warned.

Irish citizens in the UK could also lose the right to exemptions from deportation and prohibitions on employment of foreigners once the UK has formally left the European Union in 2019, the report says.

The Traveller Movement, a charity which promotes the inclusion of Travellers (Irish and other), Gypsies and Roma across the United Kingdom, will on Monday afternoon launch a report investigating the rights of Irish citizens living in post-Brexit UK. The group has voiced particular concern regarding the rights of the estimated 100,000 Irish Travellers living in the UK once the UK leaves the European Union.

The Traveller Movement is calling for a general law to ensure Irish citizens are treated equally with British citizens. It says introducing such a law would remove the need to consider the effect on Irish citizens of individual laws and would “give effect to the original purpose of the Ireland Act 1949”.

If the UK ends the special rights of EU citizens, Irish people living in Britain would have no legal right to enter, stay, work and rent private accommodation and could be excluded from National Health Service (NHS) treatments, the report adds.

Lord David Alton of Liverpool, a crossbench member of the House of Lords, called for the protection of Irish families and individuals living in the “hostile environment” which has been created around migrants living in the UK and which require employers, banks and landlords to carry out immigration checks. Lord Alton, whose mother was an Irish speaker from the West of Ireland, added that landlords were less likely to rent to tenants without British passports.

Writing to Brexit minister Lord Martin Callanan last month, Lord Alton warned that the rights of Irish citizens - future generations and those already living in the UK - were at risk and needed to be “secured with urgency”.

He also questioned the “reciprocal rights” Irish and British citizens enjoy under the 1949 Ireland Act and expressed concern around the power to deport Irish citizens. He had not heard a “sufficient explanation as to how the Common Travel Area provides citizens with the rights to work or receive healthcare”.

“Throughout history, the Irish community have been a fundamental part of British society and continue to shape Britain for the better,” wrote Lord Alton. “The contribution of the Irish is something of which we should be immensely proud and we much ensure their status here is unaffected by Brexit.”

He said: “In these most uncertain times, I am afraid Irish citizens require and indeed deserve more than warm words. We need clear and absolute legal guarantees to Irish citizens, because when laws are complex or unclear they are open to misinterpretation and this can lead to severe consequences for individuals and families.”

Yvonne MacNamara, chief executive of the Traveller movement, warned that certain groups, including Irish Travellers, would be much more vulnerable if laws were unclear and left to interpretation by employers, landlords and officials. “Unless the government acts to clarify and guarantee the rights of Irish citizens, it is not hard to imagine how Irish Travellers could be subject to greater levels of prejudice and discrimination than they already face,” said Ms MacNamara.