IRA ‘has left the stage’ and is not involved in Sinn Féin, Doherty says 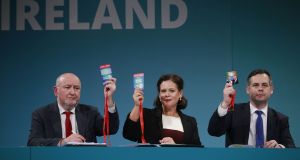 Sinn Féin TD Pearse Doherty has strongly rejected an assessment by the PSNI which said the IRA still exists but is no longer involved in paramilitary activity.

The PSNI assessment suggested the IRA had a role in the political direction of Sinn Féin but Mr Doherty said the paramilitary organisation had “left the stage”.

Mr Doherty was asked to clarify comments made by party leader Mary Lou McDonald in an interview on RTÉ yesterday, in which she did not specifically say the IRA no longer exists. He said Ms McDonald had on numerous occasions said the IRA was gone.

“I am a member of the collective leadership of Sinn Féin. Mary Lou is the leader and she takes the decision collectively with the rest of it.”

Mr Doherty said the PSNI report had formed the basis of a “political attack” from Fianna Fáil leader “Micheál Martin and all the rest”. Mr Martin at the weekend claimed “shadowy figures” were prominent in the background in Sinn Féin.

“He is running scared of the fact that Sinn Féin is offering real solutions to real problems that people face on a daily basis. He is resorting to scurrilous attacks on our party leader and trying to divert attention from the real issues.”