Independent TD says Varadkar did not back healthcare scheme

Dr Michael Harty abstained on vote for taoiseach over commitments 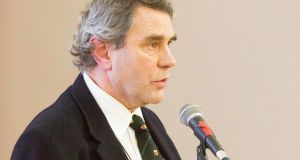 Dr Michael Harty: said the Taoiseach balked at the cost of implementing the “Future of Healthcare” report, which requires additional annual spending of €700 million.

Independent TD Dr Michael Harty says he decided to withdraw support from the Government after Taoiseach Leo Varadkar refused to back the speedy implementation of the Future of Healthcare report.

Dr Harty said implementation of the report and of commitments in the programme for government were his two main priorities in talks with Mr Varadkar ahead of his election as Taoiseach. The report published by an Oireachtas committee last month was a blueprint for the health system over the next decade.

Having supported Enda Kenny’s administration for the past two years, he abstained on the vote for Mr Varadkar as Taoiseach on Wednesday after failing to secure commitments on his priorities.

Dr Harty, a GP in Co Clare, met Mr Varadkar twice prior to the formation of the new Government. He said the Taoiseach balked at the cost of implementing the Future of Healthcare report, which requires additional annual spending of €700 million. However he did undertake to ask Minister for Health Simon Harris to report to Cabinet on which measures in the report could be implemented speedily.

“I didn’t get the impression that the Government was welcoming the health report with open arms,” he told The Irish Times.

Dr Harty’s other priorities related to issues in rural Ireland such as the post office network, bureaucracy affecting the provision of grants under the Leader programme and the need for balanced regional development. He also raised delays in upgrading Ennis hospital and the provision of extra beds in St Joseph’s community hospital in the town.

“I didn’t get sufficient encouragement for these items. This wasn’t pork barrel politics; it was about moving things on that had already been approved.”

Mr Varadkar’s decision to create a separate ministry for rural affairs is a positive move, he said. Dr Harty looks forward to operating in the Dáil as a “fully independent voice” “I will look at each issue on its merits and I won’t be a disruptive voice.”