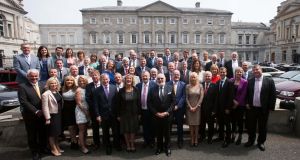 Senators before the first sitting of the 25th Seanad at Leinster House, Dublin. Photograph: Gareth Chaney/Collins

Eleven Independent Senators marked the first day of the 25th Seanad on Wednesday by sponsoring a Bill which would result in substantial reform of the Upper House.

The Seanad Bill 2016 includes all of the major Seanad reforms recommended by a committee chaired by former senator Maurice Manning.

The reforms include a provision that would have 30 of the 60 seats elected by the public.

State passport-holders who live in Northern Ireland or abroad would also be entitled to vote for these seats.

The six university seats would remain but the franchise would be extended to include new universities and third-level institutions that are currently excluded.

These include the University of Limerick, Dublin City University and other institutions that gain university status.

A total of 13 seats would be elected by TDs, outgoing Senators and county councillors.

The remaining 11 seats would be nominated by the Taoiseach of the day, as is the current practice.

The Manning reforms were drafted following the defeat of the referendum to abolish the Seanad in 2013.

They are in keeping with the specific provisions in the 1937 Constitution.

The Bill, when it is presented in the Seanad later this month, is likely to attract support from Fianna Fáil and other groups on the Opposition benches.

Speaking at a media event in Leinster House on Wednesday, Independent Senator Michael McDowell said he believed the Bill would be adopted.

“I believe the Taoiseach is committed to it. He has publicly endorsed it and it is part of the programme for government,” said Mr McDowell.