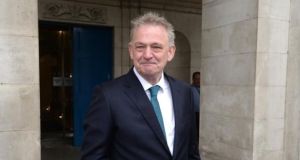 “I am the only one who is saying that he not Santa Claus. He should take the pensions and have a nice seven years.” Photograph: Dara Mac Dónaill

Presidential candidate Peter Casey has said President Michael D Higgins “stopped being wonderful two or three years ago” and claimed only thing he is remembered for doing is having met Queen Elizabeth.

Mr Casey referred to a conversation he had with a taxi driver several weeks ago who told him Mr Higgins “does nothing and costs us a fortune”. Mr Casey said that comment had resonated with him.

“The President should be inspiring people. He was very good with the queen [in England] but that is the only memorable thing. I don’t give him points for meeting the queen.”

Mr Casey was speaking at the official launch of his presidential campaign at CHQ in Dublin on Friday where he also said he was the only one of the candidates who did not view Mr Higgins as “Santa Claus”.

He said Mr Higgins had not inspired in the way the previous presidents had inspired.

He said he believed the other candidates had been far too deferential to Mr Higgins, as had the media.

Mr Casey said when he heard the presentation of other candidates to county councils, he had heard Sean Gallagher and others say Mr Higgins was a wonderful president.

“My question to Seán was: If he is that wonderful why do you want to stop him having a second term?

“He has no answer for that. Or if you think you were more wonderful, when did he stop being wonderful?”

He said that Mr Higgins had done 535 engagements in the first year but had subsequently dropped to 320. That was a drop-off of 42 per cent, said Mr Casey.

He also said Mr Higgins had “skipped out” of two debates, one to meet a member of the British monarchy who was number 10 to the throne.

“He had an opportunity to explain but he went off and went for a cup of tea [with the British royal],” Mr Casey said.

“I am the only one who is saying that he not Santa Claus. He should take the pensions and have a nice seven years.”

The former Dragons’ Den panellist (60) said he had no political axe to grind as president but said his experience as a global businessman put him into a unique position to tap into the Irish diaspora abroad.

“Ireland is fighting way below its weight. There are more Irish people around the world than there are French people in France.

“We can make a difference if we can get this diaspora connected together.

“If we can galvanise that Irish soft power it will make a tremendous difference to people in Ireland.”

He spoke of bringing young people of Irish heritage home for a month each year to experience Irish life and also talked of short academic courses in Ireland aimed at the diaspora.

Asked how he could make an impact, he said his platform would resonate with everybody as there was not a single family around Ireland that was not affected by emigration.

“There is something unique about the Ireland. Everybody loves us abroad. They like our charm and our easy going nature.”