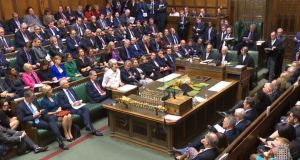 Theresa May has told MPs that Brexit negotiations stalled on Sunday because the European Union insisted there should be a Northern Ireland-only backstop written into the withdrawal agreement.

She said she could not accept any arrangement that would create a customs border in the Irish Sea, even if it would only come into effect if an all-UK customs arrangement failed.

“The EU says there is not time to work out the detail of this UK-wide solution in the next few weeks. So even with the progress we have made, the EU still requires a ‘backstop to the backstop’ – effectively an insurance policy for the insurance policy. And they want this to be the Northern Ireland-only solution that they had previously proposed. We have been clear that we cannot agree to anything that threatens the integrity of our United Kingdom,” she said.

The prime minister faced criticism from both sides of the Brexit debate, with Brexiteers demanding she specify the date when the backstop would end and Remainers calling for a second referendum. Pressed by former foreign secretary Boris Johnson, Ms May said the backstop must be temporary but the only end date she identified was an aspirational one.

“When we published the temporary customs arrangement proposal back in June, we set as a point of expectation that that would be completed by December 2021. As I indicated in my statement, one issue that we are discussing with the European Union is how we can ensure that we do reflect – properly reflect – the temporary nature of the backstop,” she said.

Ms May said the EU’s backstop proposal, which she characterised as a “backstop to the backstop”, would see Northern Ireland “carved off in the EU’s customs union and parts of the single market”, separated through a border in the Irish Sea from the UK’s internal market. But when the DUP’s Nigel Dodds asked her to confirm that the UK is leaving the EU together “with no part hived off either in the single market or customs union differences”, she declined to do so.

Sinn Féin’s Mary Lou McDonald and Michelle O’Neill were in London on Monday for meetings with the prime minister and Labour leader Jeremy Corbyn. Speaking in Westminster ahead of the meetings, Ms McDonald rejected as unacceptable Ms May’s demand that the backstop should be temporary.

“We need to be absolutely clear that Brexit itself is not a transitory event. The consequences of it will be long and will be deep. So the backstop arrangements, the answers to the questions for Ireland have to be enduring. The idea of a time-bound or a temporary little arrangement simply will not cut the mustard,” she said.