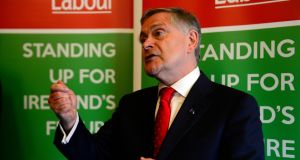 Leader of the Labour Party Brendan Howlinsays the new government may not survive more than a few months. Photograph: Cyril Byrne/The Irish Times

Labour party leader Brendan Howlin says the new government may not survive more than a few months and will not last for more than a year.

“It is intrinsically unstable. Any significant issue will knock it over because it does not have the support of the Dáil or the public” he told the Pat Kenny Show on Newstalk.

“We need to be on the ground, active, with clear leadership and a unified party.”

He added that anyone involved in politics views the role of leader as something to aspire to.

“I assumed it wouldn’t fall to me as I didn’t contest the last leadership contest.

“I’m a team player. I have worked closely with every leader since I entered the Dáil with Dick Spring. In fact you could say I was trained by Brendan Corish.

“I have great loyalty to the party and its core values and the people who worked for the party for decades.

“There is an existential threat to the party and it is incumbent on each of us who loves our party with a passion and have given our adult lives to it, to see what’s the best way forward.”

The Wexford TD said that he had attended a meeting recently with all the candidates in the General Election and there was a feeling that there should be a consensus on who the new party leader should be.

He denied that he had threatened to withdraw if there was an election for the post. “I pushed the notion that there should be consensus.

“There was an overwhelming view that I should take up the reins, reach out to the party, to make it work.

“We need to reach the 400,000 potential voters not just the 4,000 members as I suspect this government will not last long.”

Get our political team's unique behind-the-scenes take on political events in your inbox each Tuesday, Wednesday and Thursday morning