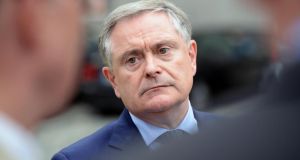 “A billion seems to be the annual figure that ministers for health demand. It’s a nice round figure,” Mr Howlin said.

“For the four years I’m here it’s been the sum looked for . . . we haven’t spare billions to give to anybody.”

Mr Howlin was speaking at the launch of a progress report on the Civil Service Renewal Plan on Tuesday.

He said a significant supplementary estimate was allocated to the Department of Health last year, “because of the recovery of the economy”.

This would restore health budgets to where they were eight years ago, he said.

Meanwhile, the Government’s capital plan, due to be published before the Dáil recess, has been delayed until early September.

The plan will announce funding for roads, flood defences and housing.

Mr Howlin has also confirmed he has written to all departments setting out budgetary parameters.

“We’re already working obviously on the October budget,” he said.

“I’ve had a number of bilateral meetings on the capital plan, obviously with all colleagues, multiple meetings with some colleagues.

“I haven’t started bilateral meetings in relation to the current expenditure side yet.”

The letters sent on Tuesday would “kick off the process”, he said.

Mr Howlin said he could not further reduce the pensions of former ministers and taoisigh, following controversy over an increase in some six-figure pensions as part of the unwinding of emergency financial measures.

Senior politicians were paid too much ahead of the last election and the sums had been “dramatically reduced”, he said.

He said the problem was that pensions were based on an end-of-career salary.

“Under our Constitution pensions are preserved property rights.

“I can no more take somebody’s pension than I can arbitrarily decide to take their house,” he said.

He said he had sought a general application for the reduction of pensions under emergency financial measures.

“I have begun to unwind that for the lowest pension cohort but I can’t exclude anybody from that . . . it has to have general application.”

Turning to the first progress report of the Civil Service Renewal Plan, Mr Watt said some 90 economics graduates had been recruited over the last three years and the recruitment would continue.

He highlighted developments such as the establishment of an accountability board, along with the first performance review process for secretaries general.

Options to strengthen the disciplinary code had been identified and open recruitment had been extended in key areas to fill skills gaps.

“When we launched the plan we said that the Irish civil service had many attributes. It’s been very effective, particularly during the crisis, in supporting the Government and getting through the difficulties that we faced,” Mr Watt said.

“But of course we’re very ambitious for the service, and we recognised that we had lots of strengths but we also had weaknesses.”

The plan was building on the strengths while addressing the weaknesses, he added.